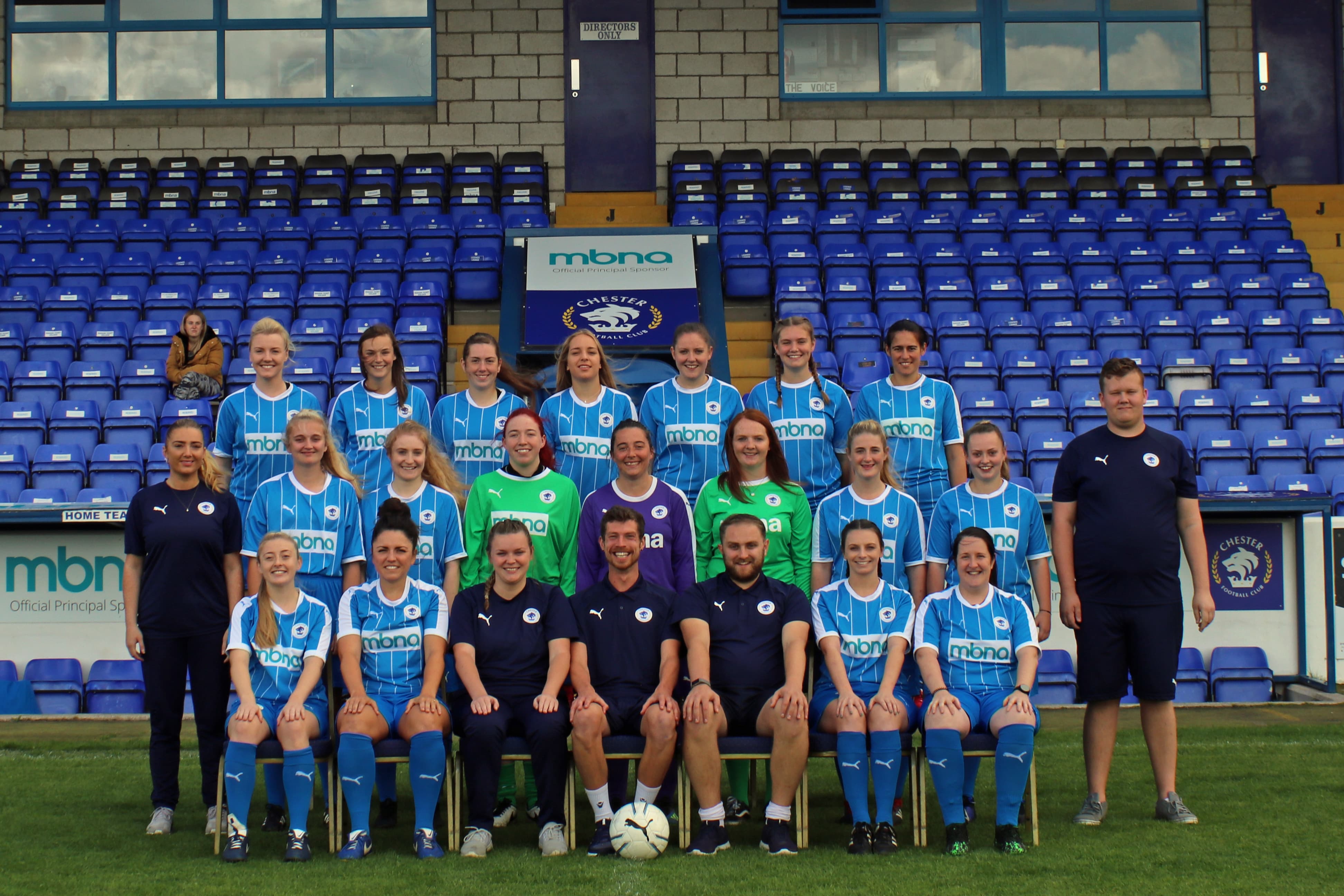 Players – Manager Martin talks us through his squad for the season…

Becky Galbraith – Goalkeeper – An experienced goalkeeper with international experience with Northern Ireland, we’re fortunate to have a player with her experience at the club. She’ll look to organise the back line a keep them in check!

Charlie Waring – Goalkeeper – We are really luck at the Club to have a goalkeeper of Charlie’s quality in our ranks. After recovering from a shoulder injury, our two will have a great battle for the number 1 short

Katie Priest – Defender – As a centre defender KP is cool, calm and collected, she’s the organiser of the back 4 and is a commanding presence in the defensive unit

Lauren Stringer – Defender – Right back and Captain Lauren, brings experience and know how to the defence. A Teacher by trade, she’ll play a crucial role in the development of the young blues

Cody Fenlon – Defender – Cody is one of many successful youth players to come through the academy. A defender that’s good on the ball and feels at home on the midfield role too. We’re really excited about watching her develop

Lucy Adderley – Defender – You will usually find Lucy at the heart of the defence a long side KP. Their almost telepathic relationship with make them a nightmare for any forwards. Combine that with Lucy’s vision and range of passing means we are threat from anywhere on the pitch!

Rebecca Webb – Midfield – Bex is one of our youngest at just 17 years of age, but you wouldn’t guess it by the way she plays. She reads the game very well, and her vision and technical ability will find gaps in any defence

Izzy Crooks – Midfield – Another young midfielder with a good football education coming through the ranks at Manchester City. She’s another ball player in the middle of the park with a keen eye to pick a pass

Amy Smith – Midfield – We’re over the moon to have Smithy back onboard for the season, as professional off the pitch as she is on it. A great runner of the ball who is sure to pitch in with her fair share of goals as well!

Sarah Gill – Midfield – P is new signing for the 2019/20 season from Crewe Alexandra. A midfielder who is very experienced at this level and leagues above. Her experience and knowledge of the game will be vital to the young blues in the squad, and has also lead to P taking a player coach role.

Amber Bailiey – Midfield – Amber gives us another option in the middle of the park. She’s a strong, energetic player with a keen eye for pass and sure to get her fair share of goals this year as well

Sarah Redman – Midfield – Sarah is a dynamic midfielder. Unfortunately Sarah missed large parts of last season due to a knee injury, however she’s started this season strong with dominating performances from midfield in pre season

Michelle Pasco – Midfield – Pasco, the tough tackling midfielder who loves a challenge. But that’s not all she’s got, strong and composed on the ball, she can control the tempo of game.

Ana Duran Anca – Midfield – first of all, congratulations go to Ana on becoming a mother to the wonderful Abigail. She’s made a storming return to the team in a variety of positions. Her versatility will be key for us this year.

Ashleigh Bullock – Attacker – Ash is one of our new signings this year. She joins us from Apollon in Cyprus. She’s a fanatic running with the ball and pace to burn! She can play anywhere across the front line. She’s sure to get goals and assists this year

Abi France – Attacker – We’re delighted to have Abi back onboard for the season. I pacey, tricky winger, just as comfortable on the left as the right, she’ll be a thorn in any defence in this league.

Rachel Kelly – Attacker – Rachel re-joins the blues after a season away from the club with Cammel Lairds. We’re really excited to have Rachel with us this year, a very technical player with lots of potential

Laura Roberts – Attacker – Laura is another product of the youth system with Chester. She adds yet more pace and tricky to the Chester attack and had bags of potential. We’re really looking forward to seeing her go to the next level

Rachel Lever – Striker – Rachel will be crucial to us this year. Her knowledge and understanding of the game is phenomenal. Her passion and desire to win means she leads from the front, yet she turns ice cold in front of goal.

Debbie Trayner – Striker – Debbie is a strong striker who looks to bring other people into play. She missed large parts of last season through injury. However we’re really excited to get her back playing

Amy Broomhead – Striker – A quick striker with a keen eye for goal and energy to burn. She’ll play a pivotal role in our promotion push this year. And between all 3 strikers prove stiff competition for places