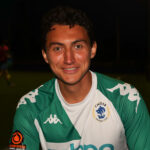 Clark reunited with Anthony Johnson and Bernard Morley on an initial short-term deal in September 2020 after working with them at Salford City four years prior. Luke’s last club before the Blues was Curzon Ashton, joining from Salford City – having played an instrumental role in the Ammies’ promotion to the National League North back in 2016, making 37 appearances. His career began with Everton, before he went on to feature for Preston North End and Accrington Stanley.