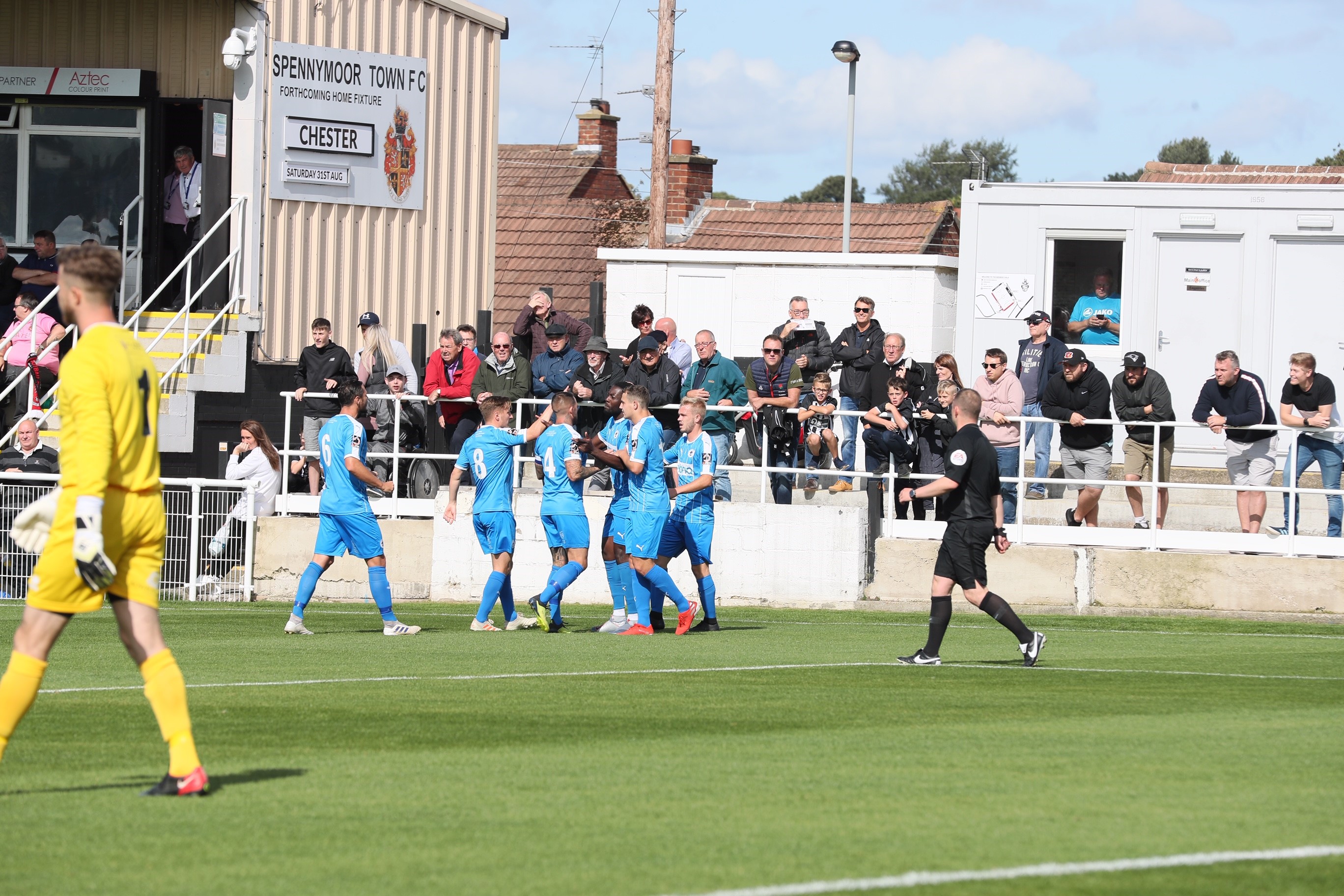 Some controversial refereeing decisions saw the Blues lose for the first time this season – as an injury time strike bagged Spennymmoor maximum points.

Anthony Johnson and Bernard Morley’s side led at the break, with Akwasi Asante firing home his fifth of the season. But, after Danny Livesey’s red card, second half Andrew Johnson and Glen Taylor goals saw Jason Ainsley’s men pic up their first victory of the campaign.

The Blues had to make one enforced change, with Gary Stopforth out of the squad due to injury. New signing George Glendon was his replacement, and in the thick of the first bit of action; booked for a late tackle on Rob Ramshaw.

Moments later though, Chester hit the front and Asante was back on the mark. Simon Grand’s long ball was flicked on brilliantly by Matty Hughes – allowing the composed forward to round up Gould and slot home.

Anthony Dudley was then denied by the keeper, as the Blues threatened a second. But Danny Livesey, who was in the thick of the action all half, was kept busy in the new few minutes.

Firstly, the experienced defender made a great block in the six-yard box to deny Glen Taylor – before clearing a Mark Anderson effort off the line after the Moors forward rounded up Russ Griffiths.

A big chance after the half hour mark fell to Grand – but he nodded Joel Taylor’s clipped cross over the bar.

Then, a few minutes of madness ensued as Referee Dean Hulme took centre stage. He firstly booked Livesey – for what appeared to be dissent – as the centre back was going off the pitch for treatment to a bloodied head, despite being penalised for a foul in the air.

It all appeared to be okay as the defender was back on the pitch winning a header in the next passage of play, but Hulme was quick to blow up and award him a second yellow card – with confusion surrounding the Brewery Field. It became apparent that the official had thought the defender had re-entered the field of play without his permission.

After the break, owing to that red, the home side dominated proceedings – and equalised on 52 minutes.

Andrew Johnson’s effort caused problems in the swirling wind, and Griffiths let it squirm under his body and into the net.

Nevertheless, it was the Blues who had the best chance of the second half. Dudley caught the defence in possession, played a neat one-two with Asante before sliding in and striking the post with his effort.

However, the resistance was broken in stoppage time when sub Adam Boyes battled with Griffiths, won a loose ball and squared for Taylor to tap into an empty net.