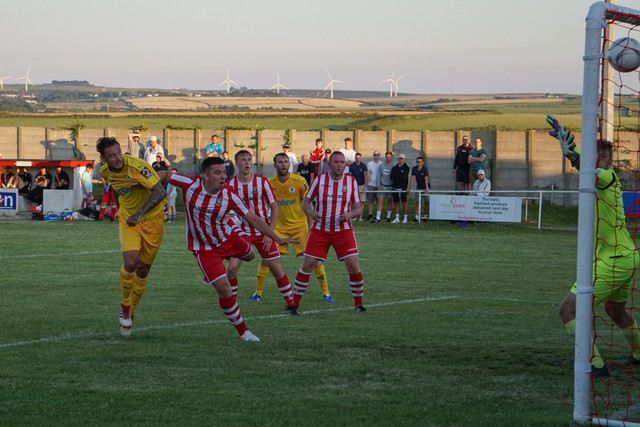 The Blues’ match action during their tour of the South West resulted in a dominant display and victory against Newquay.

Chester’s Trialist striker, making his second appearance for the club, made a great impression by scoring a clinical hat-trick as Bern and Jonno’s side romped to victory.

Anthony Dudley and George Waring also struck in a convincing first half for the lads in yellow. In the second half, Lloyd Marsh-Hughes, Iwan Murray, Simon Grand and Gary Roberts from the spot but gloss on a scoreline which was a good workout midway through the week in Newquay.

The Peppermints’ striker pulled one back to make it 4-1 at the break, but five second half goals made it a good evenings work at Mount Wise.

It could have been a different story, as the hosts had a penalty inside seven minutes, but Chester’s trialist goalkeeper made his mark with a good low save from the spot.

Following this, the quality of the National League North side shone through into the scoreline.

We’d like to thank Newquay AFC for their hospitality so far this week and for hosing us for the game tonight.