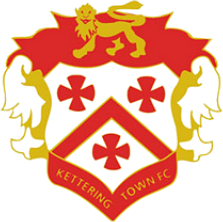 Chester battled back following Tuesday’s disappointment and picked up a point on the road at Kettering Town.

It was a scrappy and even affair and both sides ended the game with ten men following two red cards.

Bern and Jonno made three changes to the side defeated in midweek, as Simon Grand, Matty Williams and Jack Redshaw replaced Danny Livesey, James Hardy and Lloyd Marsh-Hughes.

It took until 32 minutes for a shot on target and it fell to Chester. Skipper George Glendon tried a curler from the edge of the box after patient play, but Jackson Smith got across to make the save.

Kettering number three Alex Brown struck the crossbar a few minutes later following Kyle Perry’s flick on, but the flag was up for offside.

Luke Ward managed to get a free kick up and over the wall just before the break but Louis Gray made the catch, and this was followed by an opportunity for Kevin Roberts at the other end who lifted his shot over the bar from Glendon’s find.

The Blues had an opportunity just after the restart as Redshaw connected with Weeks’ corner but couldn’t quite keep it down.

Moments later the hosts were reduced to ten men as the dangerous frontman Perry was sent off for a second bookable offence, fouling Grand.

Chester tried to muster up chances with the man advantage but struggled to find the net. Weeks’ dangerous free kick on the hour found its way to Redshaw, but he couldn’t find the target as his shot was blocked.

At the other end, Dan Cowan’s solid performance at the back was underlined by two crucial blocks to deny Claudio Ofosu and sub Lamine Sherif.

The numbers on the pitch were evened up on 87 minutes, as Kevin Roberts was shown a second yellow of his own for an alleged foul on Alex Brown. Both sides had half chances in the six minutes of stoppage time, but failed to break the deadlock as it ended even.