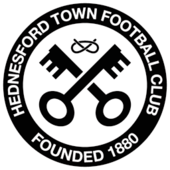 Chester advanced in the Buildbase FA Trophy on a cold December evening at the 1885 Arena against Hednesford Town.

First half goals from Brad Jackson and Akwasi Asante settled the matter, although a spirited performance from the Pitmen saw them give the Blues a real scare in the second half with Danny Glover’s goal making it a tough final 40 minutes.

The Blues made two changes from Saturday’s draw. Jamie Morgan and Anthony Dudley returned to the side in place of Matty Hughes and Kevin Roberts.

Chester saw a lot of the ball in the opening quarter of an hour, without creating a big chance. Half opportunities came and went as Jackson fired across goal before George Glendon was crowded out inside the box.

But then, on 16 minutes, the deadlock was broken. A good move ended with Joel Taylor crossing for Asante – his shot took a deflection and looped up for Jackson to fire the loose ball into the roof of the net.

Jackson and Asante then went close for the Blues, whistling a shot wide and being denied by Andy Wycherley respectively, before the lead was doubled on 34 minutes.

It was great work on the right byline by Danny Elliott to hang a cross up into the area, and Asante headed it across the keeper into the back of the net.

But it wasn’t all Chester’s way, as Russ Griffiths had to be alert twice in quick succession to deny Reece King and then Danny Glover inside the box.

The warning signs were there, and the Pitmen halved the deficit just five minutes into the second half. A cross from the right was headed into the air and Danny Glover volleyed the loose ball into the bottom corner.

And the Hednesford Interim Co-Manager almost levelled 60 seconds later. Glover spun away from Simon Grand and drove forward, before smashing a shot over the crossbar.

The visitors were getting closer as momentum continued to grow – Osebi Abadaki firing low for Griffiths to save and Grand to scramble clear. Then, the leveller got even closer ten minutes later as James Hurst sweetly caught a volley from 25 yards which smashed against the post.

At the other end, Chester should have wrapped it up by Gary Roberts sidefooted wide from the edge of the box and Dudley was denied by a stunning reflex stop from Wycherley after good work by sub Elton Ngwatala.

It was a somewhat nervy end to the game, but the Blues held firm and advanced into Round Two – a trip to Royston Town beckons.