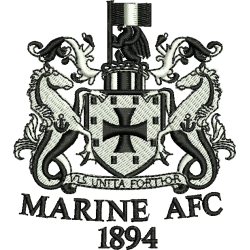 Marine upset the Blues with an excellent performance at the Deva Stadium to advance into the First Round of the Emirates FA Cup.

James Barrigan’s penalty nine minutes from time saw ex-Chester boss Neil Young steer his side through the Fourth Qualifying Round.

Marine impressed, particularly in the opening 45, as they were solid at the back and also created one or two chances in front of the Harry McNally Terrace. First, Neil Kengni turned on the edge of the box with a bit of space – but fired his effort well over.

Chester then had a slight opening, as Brad Bauress found Brad Jackson in space, he turned and drove forward before dragging a shot wide.

Kengni then found Mo Touray in the Chester half who wasted a chance on the edge of the box with options available in space to his left.

Danny Elliott went close before the end of the half, rising to head Joel Taylor’s cross towards goal however it was wide of the far post.

Elliott then forced Bayleigh Passant into action at the start of the second half – making a yard for himself on the edge of the area – before seeing his powerful attempt pushed behind at the ‘keepers near post.

Declan Weeks then opened up Marine with an excellent solo run through midfield, the ball eventually fell to John Johnston who saw his shot well blocked – before Elliott’s effort struck the crossbar on the rebound – however the flag had already been raised.

Neil Young side would score the deciding goal with nine to play via a penalty. An awkward bounce just inside the area struck Danny Livesey on the arm – and Ed Duckworth was quick to point to the spot.

James Barrigan stepped up and drilled the spot kick down the middle with Louis Gray diving to the left.

Chester mounted a fightback and had some big chances to equalise, but couldn’t find the goal to take it to penalties. Weeks drove over from distance, before Livesey nodded into the net from Joel Taylor’s excellent free kick – but once again the Assistant was flagging for offside.

Substitute George Waring had two big chances in stoppage time, but failed to find the goal. First, he headed over the bar from Livesey’s dangerous cross from just inside the area – before striking the side netting with an effort in the six yard box after Brad Bauress had put in a teasing delivery.