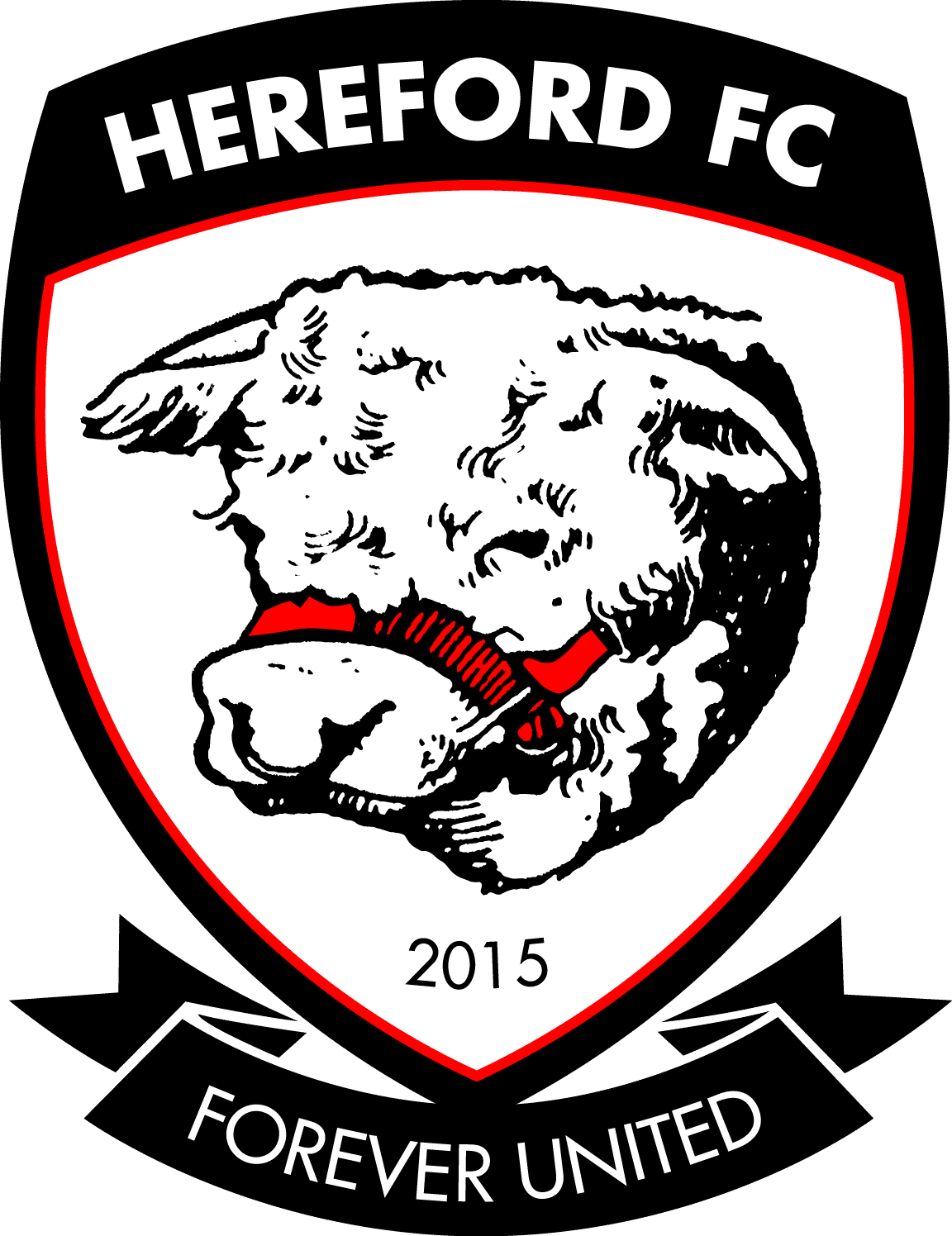 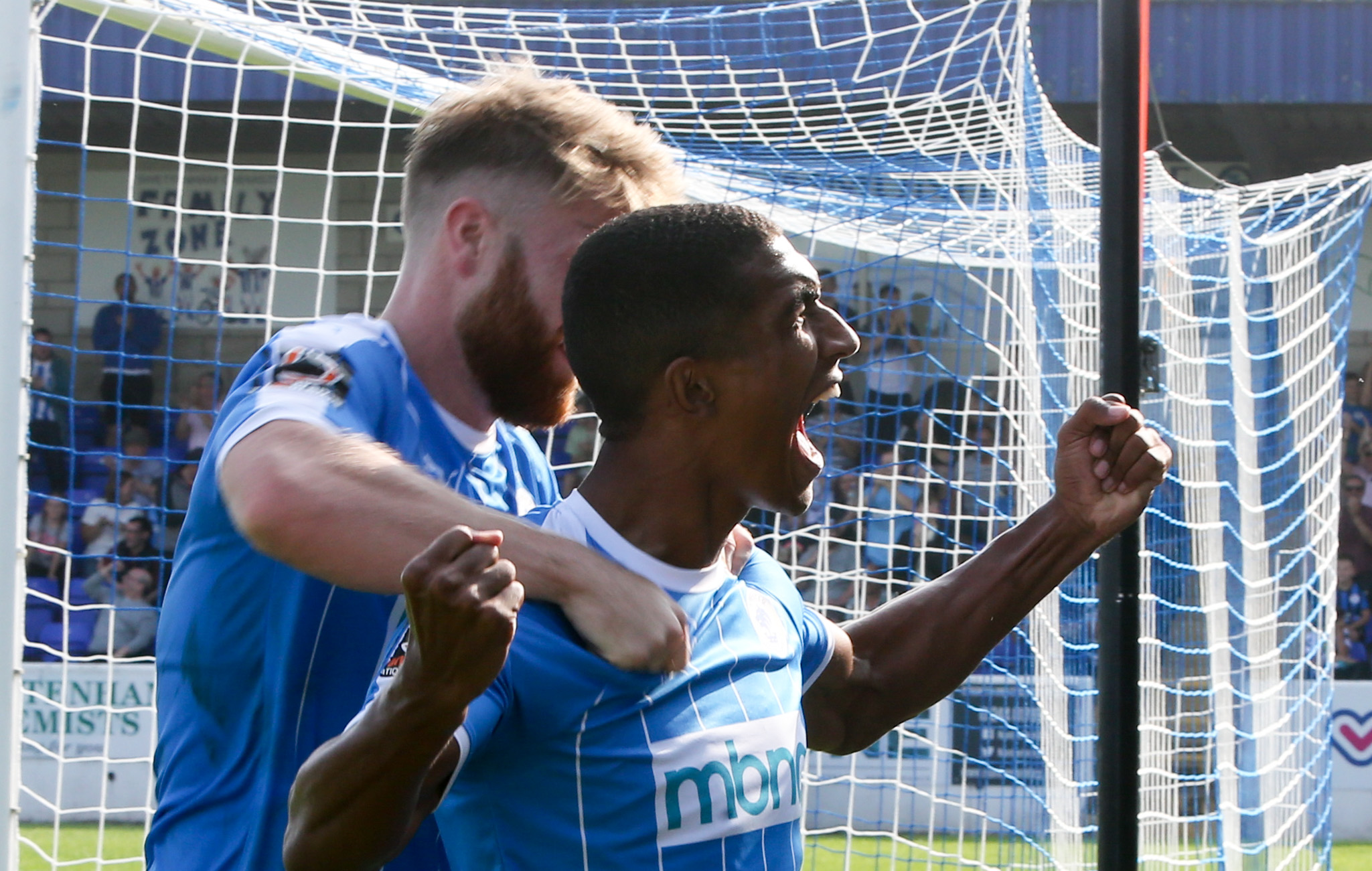 Dominant Chester FC extended their unbeaten start to the season to seven games as they saw off promotion rivals Hereford.

A brace either side of the break from Akwasi Asante, as well as goals from Anthony Dudley and Danny Elliott had the Blues cruising late in the second half.

However the impressive Russ Griffiths was denied a clean sheet as Jordan Cullinane-Liburd scrambled home a late consolation in the dying embers.

The result keeps the Blues third, but breathing down the necks of King’s Lynn Town and York City.

Anthony Johnson and Bernard Morley made two changes to the side that beat Kidderminster on Saturday, as Asante and Scott Burton each made their first starts of the season, in place of George Waring and the injured Gary Roberts.

Chester started brightly in the first five minutes as a Joel Taylor cross caused unnecessary problems for Brandon Hall in the Hereford goal. Down the other end the full-back was causing issues for himself as he gave the ball away to Bradley Ash who curled well over.

Keiran Thomas went into the referee’s notebook with a quarter of an hour gone for a late challenge on Asante. From a similar angle to the famous free-kick at Darlington last season, the Blues set out to repeat history. A quick pass teed up Matty Hughes for a cross on the edge and on the end of which was Kevin Roberts who rose highest and thumped his header against the crossbar.

Chester’s pressure continued as the clock ticked through to 20, but a couple of quick corners didn’t threaten the visitors. That was until Hughes’ effort inside the penalty area was blocked at close range before Asante picked up the seconds and smashed the ball past Hall for his third of the season.

The hosts continued to dominate their West Midlands counterparts and Taylor burst past Thomas on the left-side before flashing a quick ball across the face of goal. This didn’t find a blue shirt until it met Brad Jackson at the back post, though he was unable to make a solid connection.

Then it was two as play reached the half hour mark. Asante out-jumped Josh Gowling down the right side and burst towards the Bulls’ penalty area. He fed Hughes who took control of the pass and set Dudley free. The former Salford forward took on his man, switched onto his right and curled a cool effort into the bottom right corner. Completely deserved.

Taylor stung the palms of Hall when a loose ball fell his way from 20-yards out. Then Hereford swept forward for their first decent opportunity in half an hour as Mike Symons laced one on the right side into the arms of Griffiths.

Ash spurned a huge opportunity in the Chester box as Gowling, in acres of space, set up a shooting opportunity at close range but he fired over.

Then in the 45th minute Taylor went on another commanding run under pressure from three Hereford defenders on the edge of the left-side of the penalty area. He beat all three with ease, burst into the box and looked to see off another with a goal but his shot was blocked.

The visitors looked sharp after the restart with a couple of bursts forward but nothing to trouble Griffiths. Then, despite this, Chester extended their lead and it was Asante again. Jackson created the chance out of nothing as he got to a ball on the right and worked his way into the box. Spotting the run of the goalscorer he pulled the ball back for the number nine to slam home the third of the afternoon.

Jagger Cane worked a move on the edge after a pair of successive corners but couldn’t muster up a Hereford consolation as he shot wide. Then a quiet spell of 15 minutes ended with the Blues thinking they’d scored another, substitute Waring was offside when he bundled the ball over the line at the back post.

However the smiles quickly returned as new boy Elliott scored his first goal for the club without his Trialist B alias. He got on the end of a Roberts delivery and headed across goal to give Chester a much deserved fourth.

Tom Owen-Evans went close for the Bulls late on as he tested the gloves of Griffiths who parried his effort behind. Raheem Hanley was next to try and rescue some pride for the travelling side but his effort from distance was also pushed for a corner.

The resulting set piece caused pinball in the box, with the ball eventually turned over the line by Cullinane-Liburd to give the travelling support something to cheer about. With two minutes remaining this was too little, too late.

And too late indeed it was as referee Kristian Silcock blew up for full-time and Chester recorded a richly deserved 4-1 victory.