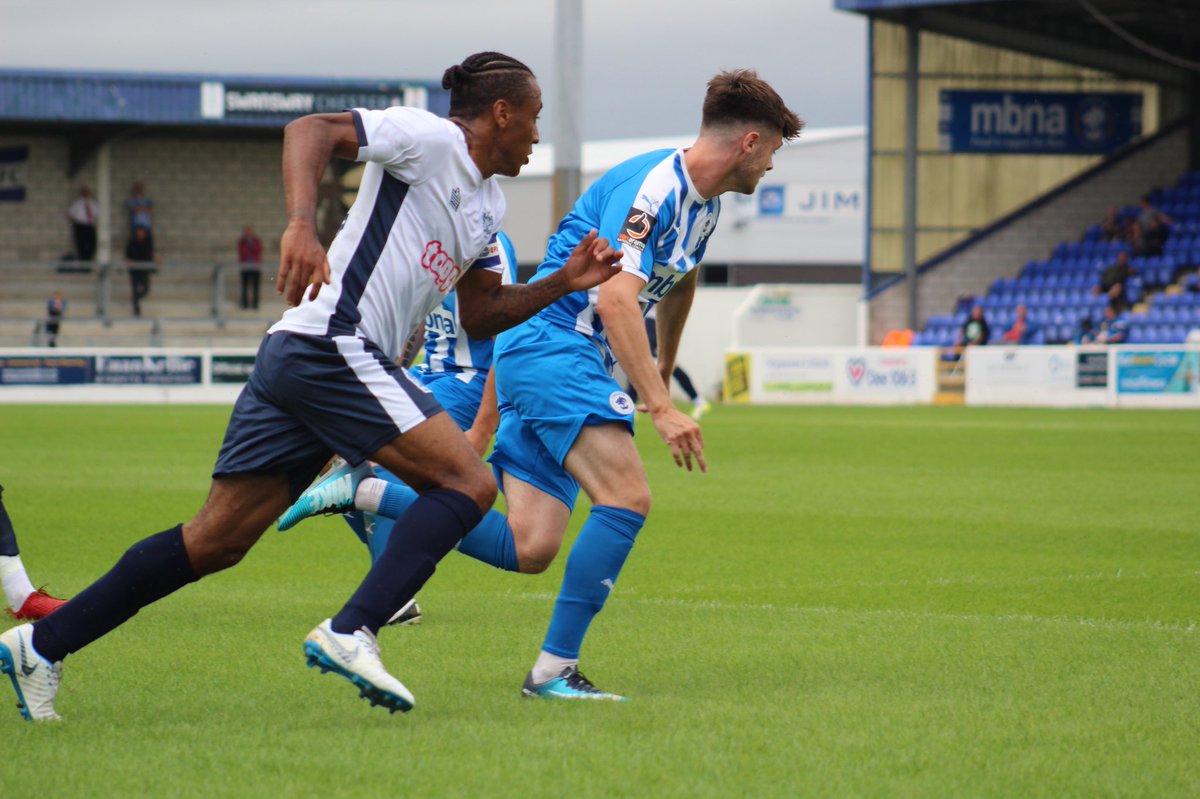 A goal from substitute Gold Omotayo early in the second half gave Bury victory in a competitve friendly at the Swansway Chester Stadium.

On the heels of an impressive four-nil victory from a youthful Chester side over Llandudno last night, the Blues found themselves on the back foot early doors, with Danny Mayor firing low from the edge of the penalty area, but Grant Shenton was able to make a comfortable save.

Chester responded brightly, forcing a number of corners but it was Bury who almost broke the deadlock as Chris Dagnall was unmarked at a cross, but he couldn’t hit the target.

The visitors again came forward and when a corner found Will Aimson at the back post, he hooked it back across goal and was denied only by the crossbar.

As Bury built momentum the visitors pushed forward again and former Blues striker, Jordan Archer almost put the visitors ahead as he got one on one with Shenton but Simon Grand got back well to turn the out for a throw-in.

Shenton had to be alert again as Archer met Neil Danns’ corner, with the Blues ‘stopper getting down well to his right to push the ball away.

Chester almost managed to get Trialist A in on goal following a through ball from Dan Mooney, but Joe Murphy was quickly off his line to gather the ball.

With five minutes to go until the break, Bury almost found themselves ahead, Chris Dagnall got in behind the Blues back line, rounded Shenton but could only strike the post from the angle.

It was the hosts who ended the half on a high though, as Mooney won the ball back high up the field, skipped past a defender but his curling effort was denied by Murphy for a Chester corner. From the resulting corner Simon Grand got in at the back post and Murphy again had to be alert to make the save on the goalline.

Bury were almost gifted an opening goal after a mistake from Shenton allowed Omotayo a chance but he couldn’t hit the target.

The Bury striker didn’t have to wait long to make amends though, as he met a cross from the right side and turned the ball into the back of the net, for the opening goal of the game.

Bury continued to look the more likely to score, with Neil Danns forcing Grant Shenton into a good save.

The Blues kept battling and had the ball in the back of the net as Simon Grand turned home following Steve Howson’s header back across goal, but the offside flag was raised.

Chester once again had Shenton to thank for keeping the deficit to one, as he superbly denied substitute Chris Sang from close range after a corner had fell to the Bury forward at the back post.

Despite a raft of changes throughout the second half, the Blues continued to search for an equaliser, with Matty Hughes firing too close to Matthew Hudson in the Bury goal. In the end the visitors were able to hold on and take the victory.