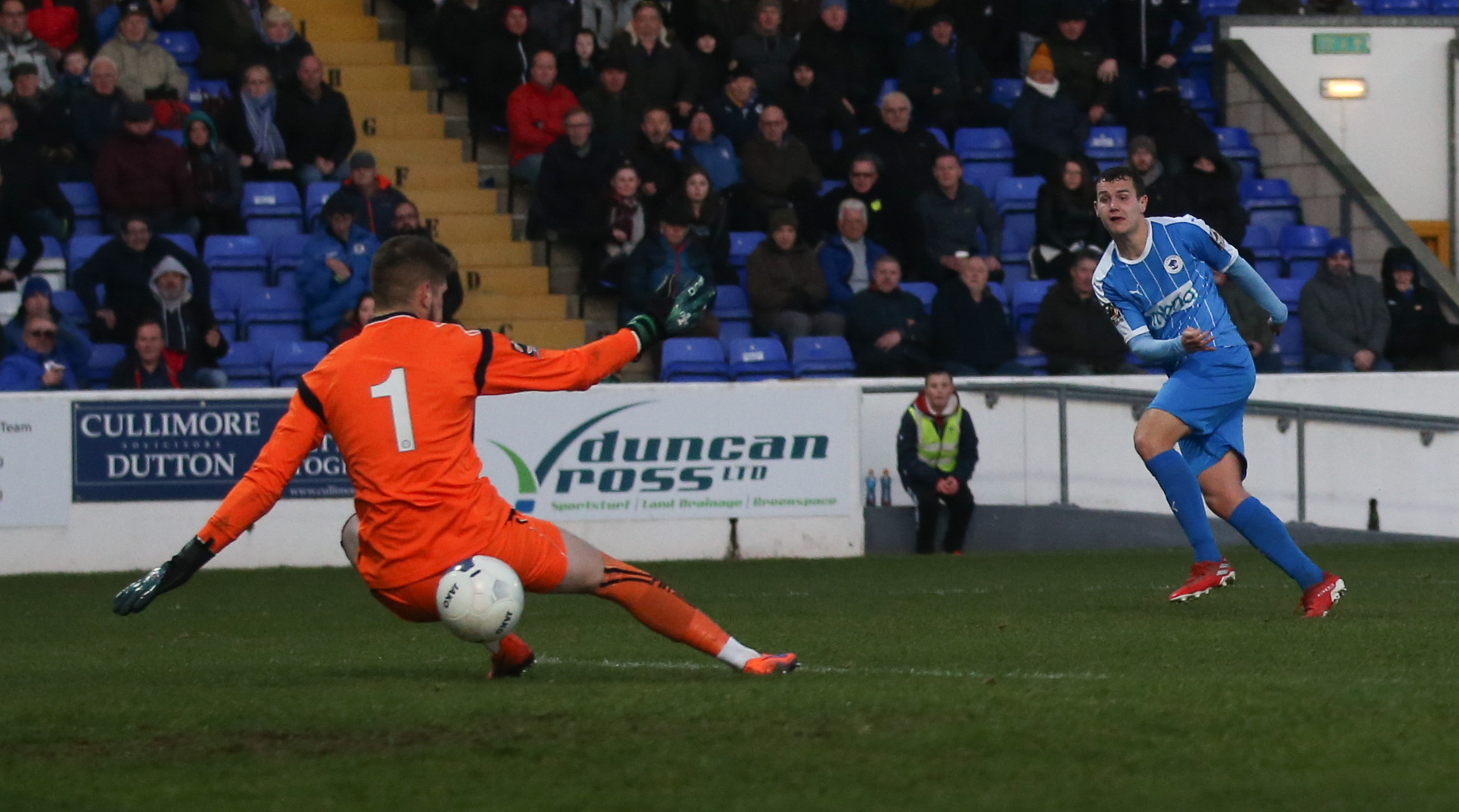 Chester FC made it three consecutive victories in all competitions, coming from behind to beat Bradford (Park Avenue).

Billy Priestley had put Bradford ahead, before goals from Anthony Dudley and a stunner from Akwasi Asante secured three points for the Blues.

The Blues made three changes to the side that won at Brackley in the FA Trophy last weekend as Elton Ngwatala made his Chester debut, joined by Anthony Dudley and Akwasi Asante, replacing Scott Burton, Matty Waters and George Waring.

Chester started positively, forcing back to back corners in the opening minutes, but struggled to break down the Bradford defence for clear chances.

It was the visitors who struck the opening blow though as first Alex Hurst had a shot turned behind for a corner, and from that Billy Priestley struck right footed beyond Russ Griffiths to give Bradford the lead.

The hosts looked for a quick reply but Joel Taylor’s free kick from the edge of the penalty area was too close to Joe Green in the Bradford goal.

Chester began to find openings as the half went on, with Simon Grand finding Joel Taylor down the left side a number of times, and had a chance just before the break as Taylor’s ball found Dudley but he couldn’t get his header on target.

The Blues almost made the perfect start to the second half, Joel Taylor’s corner made it’s way to Simon Grand at the back post but he couldn’t keep his shot down.

The equaliser did come for the Blues though as a ball forward was deflected into the path of Anthony Dudley, and he fired beyond Joe Green in the Bradford goal.

After getting level it didn’t take Chester long to get ahead, with a stunning strike from Akwasi Asante. Brad Jackson burst forward and played in the Blues forward on the edge of the box, Asante took a touch and unleashed a fierce drive beyond Green into the top corner.

The Blues almost made it three just moments later as Joel Taylor’s ball picked out Asante, but his effort cannoned off the underside of the crossbar and out to safety.

Both sides tried to create chances but the defences were able to limit chances. With a minute to go Alex Hurst was given his marching orders for a second yellow card following a lunge on Gary Stopforth.

Chester almost added a third as Danny Elliott whipped a free kick just over the bar but Chester were able to hold out for the win.