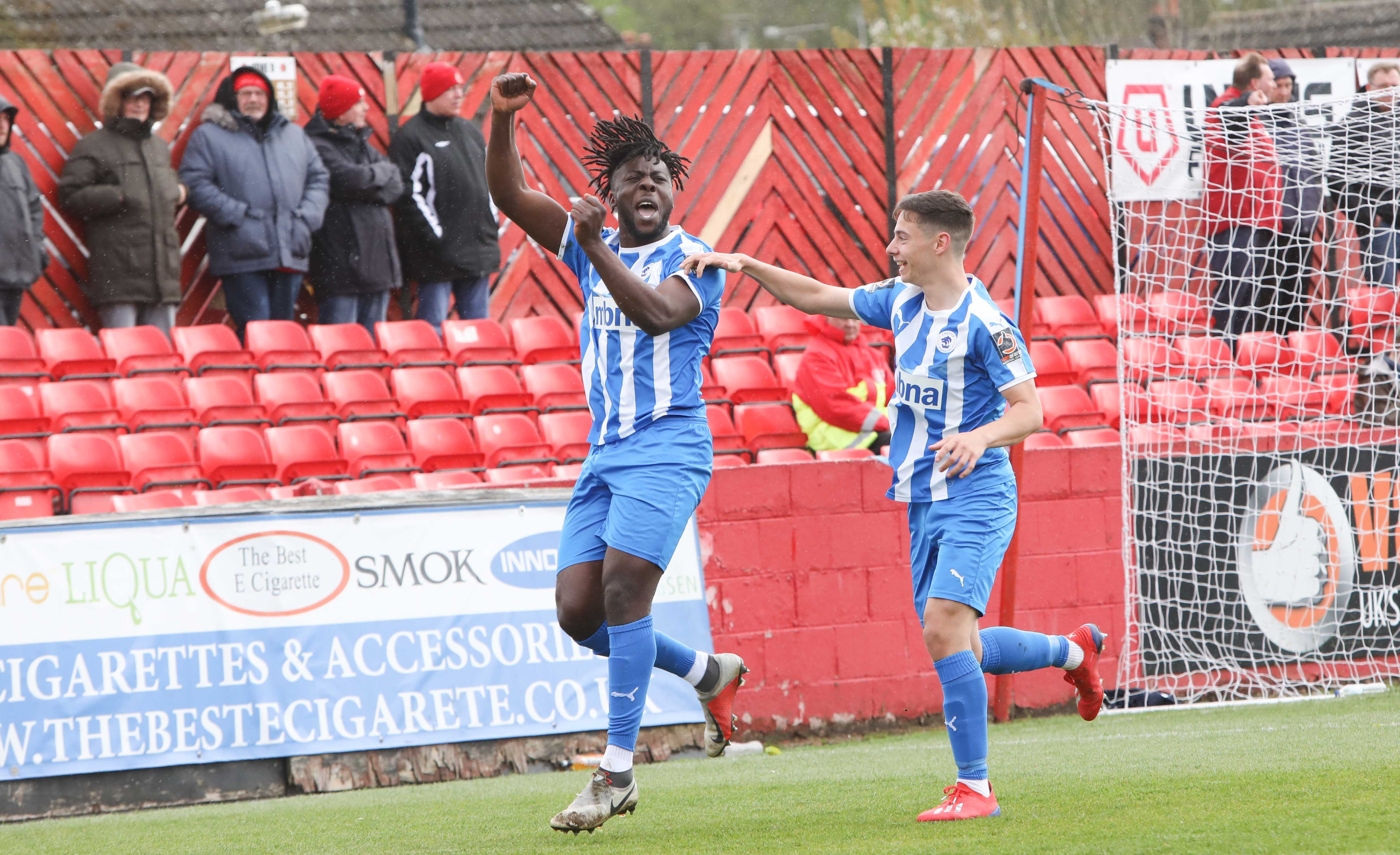 Despite a spirited performance, Chester concluded their National League North season with a 2-2 draw against Alfreton Town at the Impact Arena.

The Blues dominated the game, in particular the first half where they created chances in abundance but only converted one – another superb free-kick routine slotted home by Akwasi Asante.

Despite being reduced to ten men as Tom Allan left the field, the hosts equalised through Josh Wilde. Moments later Chester regained the lead as Waring headed home.

But Alfreton equalised again as Wilde lashed home his second on the volley from the edge of the box, as the two shared the spoils on the final day.

The visitors made two changes from the side that drew 0-0 with Brackley on Easter Monday – Anthony Dudley returned to the squad and Asante made his first start for two-and-a-half weeks.

The opening 10 minutes were slow, however Chester probably edged it. Asante’s effort from close range dipped narrowly over the bar, though the forward was flagged offside.

Then in Darlington-esque free-kick fashion, the Blues took the lead on 13 minutes. Gary Roberts, Craig Mahon and Matty Waters stood over the ball on the left-side of the box – Waters made the dummy run, Roberts passed to Dudley who hooked the ball forward to Asante. The returning Dutchman controlled the pass and placed his shot beyond Tom Nicholson and into the back of the net.

Chester charged forward from kick-off in search of a second, Asante darted down the left and crossed low for Waring who attempted to flick inside the near post, but his effort deflected behind for a corner.

Chester resumed their dominance, Asante and Waring linking up again gave the latter the chance to fire across goal. He did, but could only strike the near post.

Some more great football in the middle of the park between Waring and Mahon allowed the Irishman to play in Dudley. Whilst his ball was intercepted, the backpass to Nicholson was poor and Jackson pounced – his effort saved by the shins of the Alfreton stopper.

The Blues continued to push forward, but couldn’t take another chance before the break. Firstly with five to go, Mahon picked up the ball and charged into the box, his effort was deflected and confused Nicholson, but the Reds keeper recovered well and stretched to keep the lively winger out. Waring headed over from the resulting corner as the half reached its conclusion. Some of the best football Chester have played this season.

Alfreton had the best chance of the opening few second half minutes, Jordan Sinnott picked up the ball some 25-yards out and fired, but he dragged his effort wide.

Whilst the first 15 minutes after the restart were uneventful, the hosts certainly came out improved – though their momentum was derailed as Allan received two yellow cards in a minute for dissent, following Scott Simpson’s decision to award a Chester free-kick on the edge of the box.

Or at least you would have thought their momentum was derailed. Just three minutes later, former loanee Danny O’Brien crossed for Wilde who scrambled home. The Blues punished after not taking their chances in the first half.

However just as it did in the reverse fixture in October, the red card would always come back to haunt Alfreton. Mahon’s cross from 30-yards was flicked on at the back post by Scott Burton into the path of Waring, who looped his header over Nicholson and regained the lead.

It was nearly three on 73 – Waters took on the ball down the left and rounded Nicholson but his shot was cleared behind by a corner. Chester continued to capitalise on their man advantage, as Asante curled over moments later.

Then from nothing, Wilde got his brace to level the scores once more. Superbly, the left-back volleyed a loose ball from the edge of the box into the top corner. With the final ten minutes of the season to go, it was 2-2.

The full-time whistle then blew on a disappointing draw to end a satisfactory season – a ninth placed finish for a side ravaged with financial difficulties just sixteen months ago and relegation shortly afterwards.