A look through time on the story of Chester…

Chester Football Club was founded in 1885 as an amalgamation of Chester Rovers and Old King’s Scholars and initially played their home games at Faulkner Street in the Hoole area of the city. For the first five years of their existence they only played friendlies until joining the Combination League in 1890. A first senior trophy, the Cheshire Senior Cup, was won in 1895 and in 1898 the club relocated to the Old Showground also in Hoole. The stay was only brief as, twelve months later, the club were forced to temporarily disband when the ground was lost to housing. 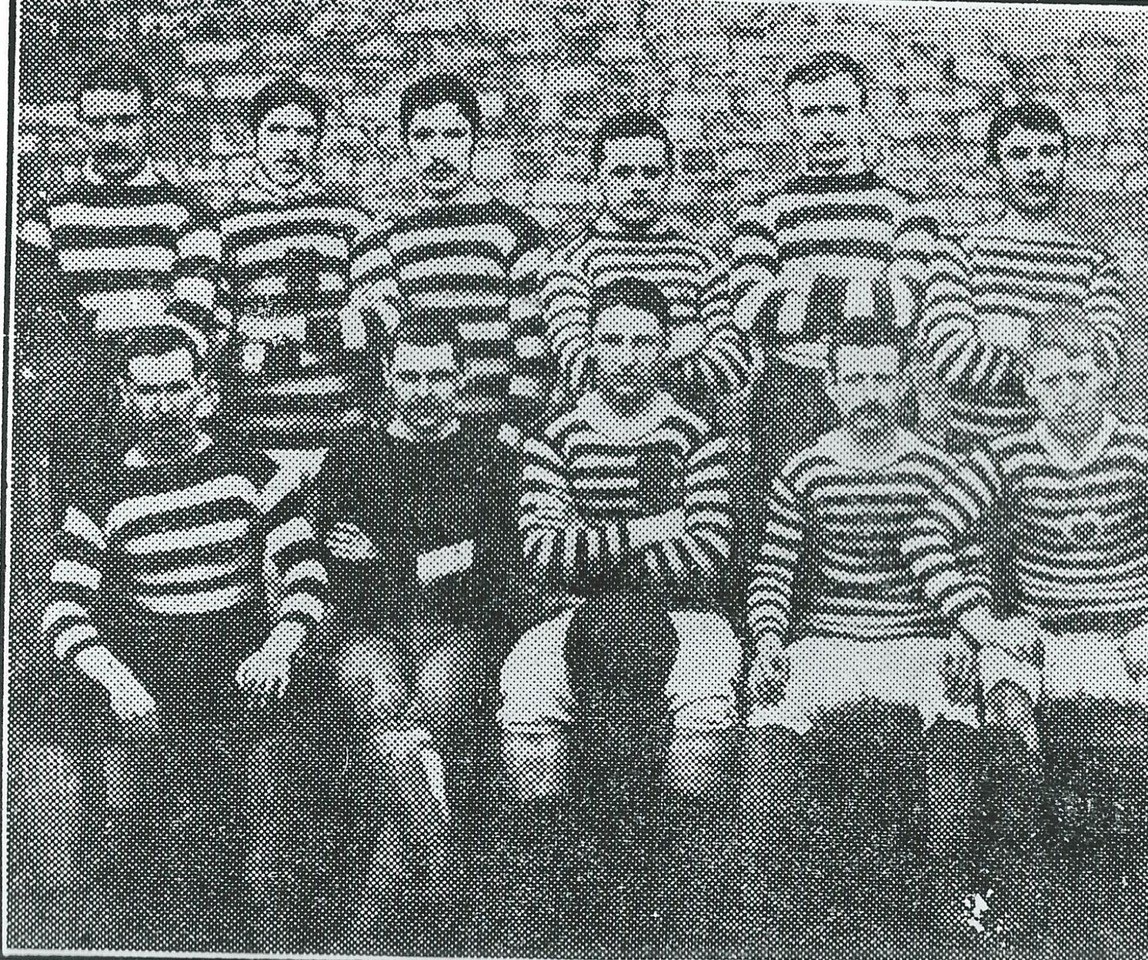 In 1901 a new home was found in Whipcord Lane and the club went from strength to strength, winning the Combination League in 1909 after finishing runners-up in the preceding five seasons. The early 1900s saw the first of Chester’s Welsh Cup victories, against Connah’s Quay in 1908, and further victories followed in 1933 and 1946. By now the club had moved to the much loved Stadium, in Sealand Road, which remained home for 84 years until the final game against Rotherham United in April 1990. 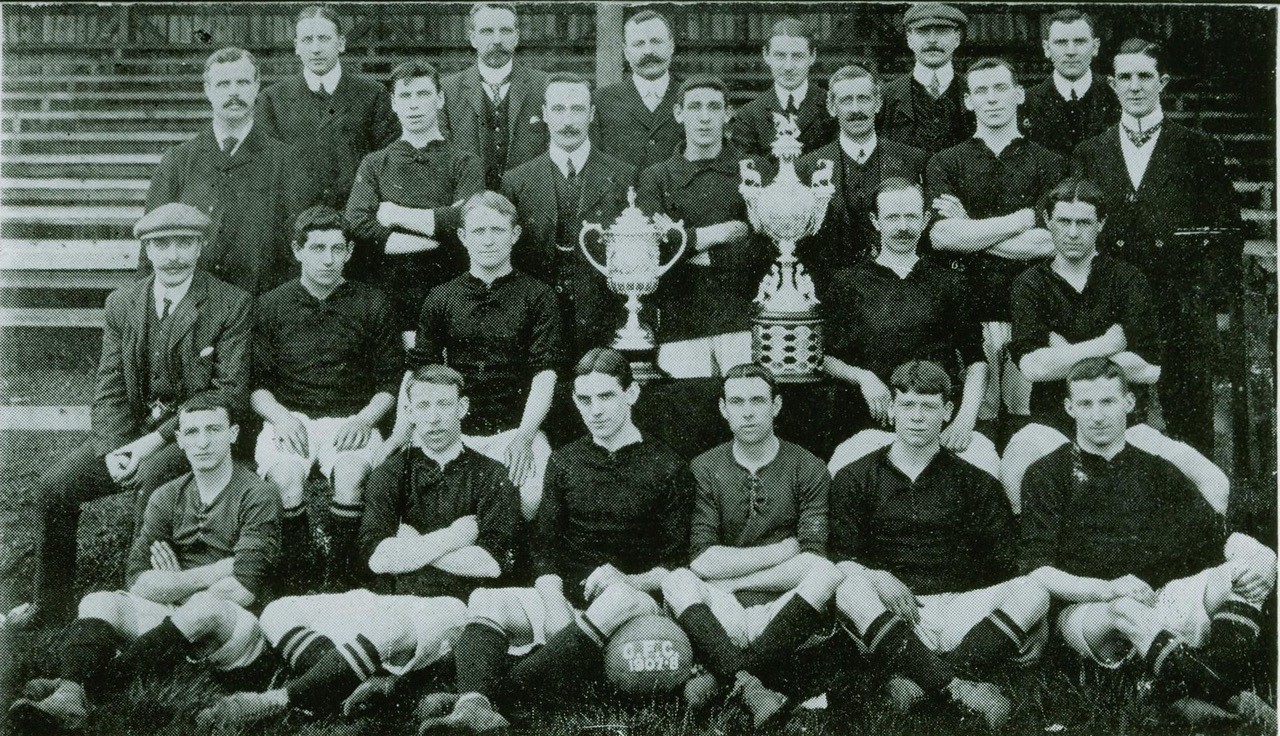 In 1910 Chester was elected to the Lancashire Combination and after the First World War were founder members of the Cheshire County League which they won in 1922, 1926 and 1927. The appointment of Charlie Hewitt as manager in 1930 saw a concerted effort to attain League status and crowds flocked to the Stadium to see the goalscoring exploits of Salford school master Arthur Gale who scored an incredible 73 goals in 39 League games. On June 1st 1931 Chester were elected to the Football League, in place of Nelson, and throughout the 1930s never finished outside the top 10 in Division Three North. In 1933 Chester hammered Second Division Fulham 5-0, their finest FA Cup performance, and in 1936 the club achieved their highest League victory, a 12-0 win over York City. In 1964/65 the ”Famous Five“ forward line of Talbot, Metcalf, Ryden, Morris and Humes scored 116 of Chester’s record 119 League goals while, in the FA Cup, the club were narrowly beaten 2-1 by League champions Manchester United after leading at half time.

Promotion from Division Four was achieved under Ken Roberts in 1974/75. The club also reached the League Cup Semi-Final where they were narrowly defeated by Aston Villa following wins over League champions Leeds United (the 3-0 victory is arguably the club’s greatest result) and Newcastle United. 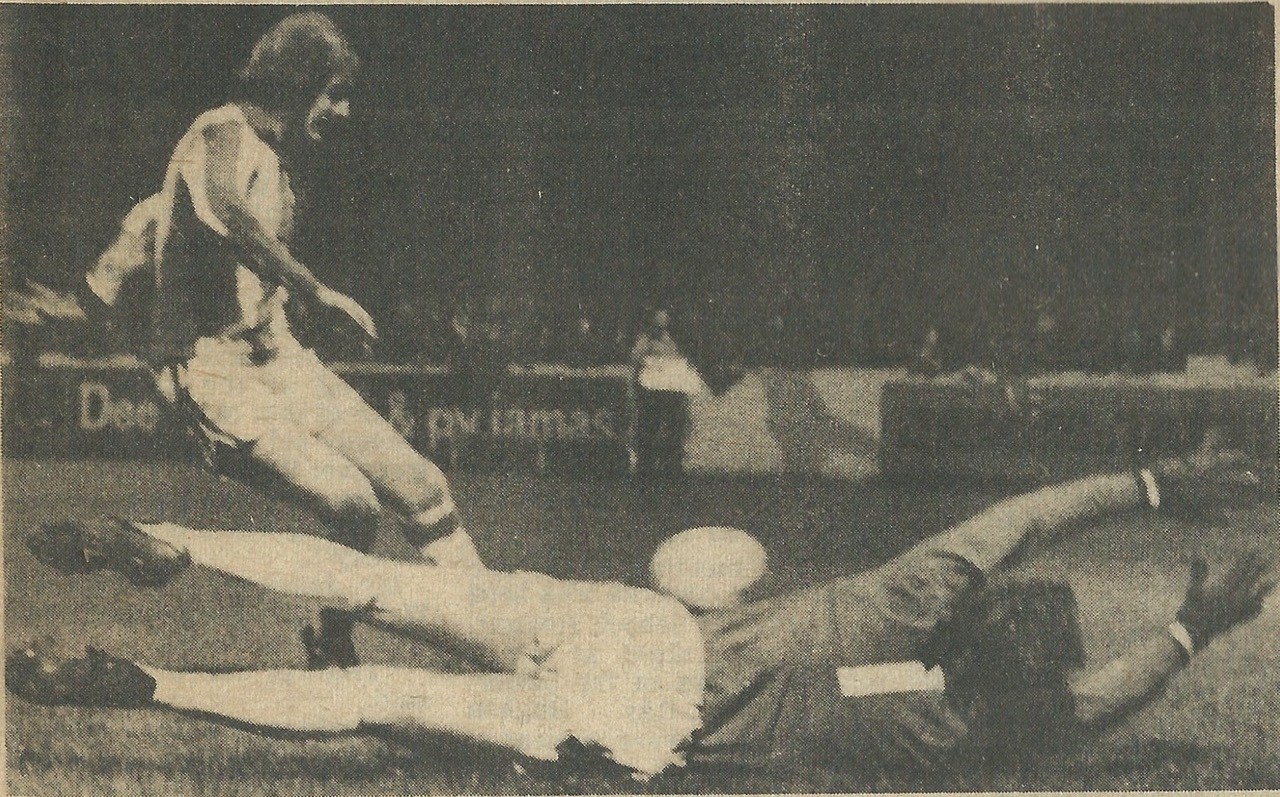 The late 1970s saw the emergence of Ian Rush, who became the club’s record transfer when he moved to Liverpool for £300,000. Relegation in 1982 was followed by a name change, to Chester City, in 1983 and three years later Harry McNally led the club back into Division Three. 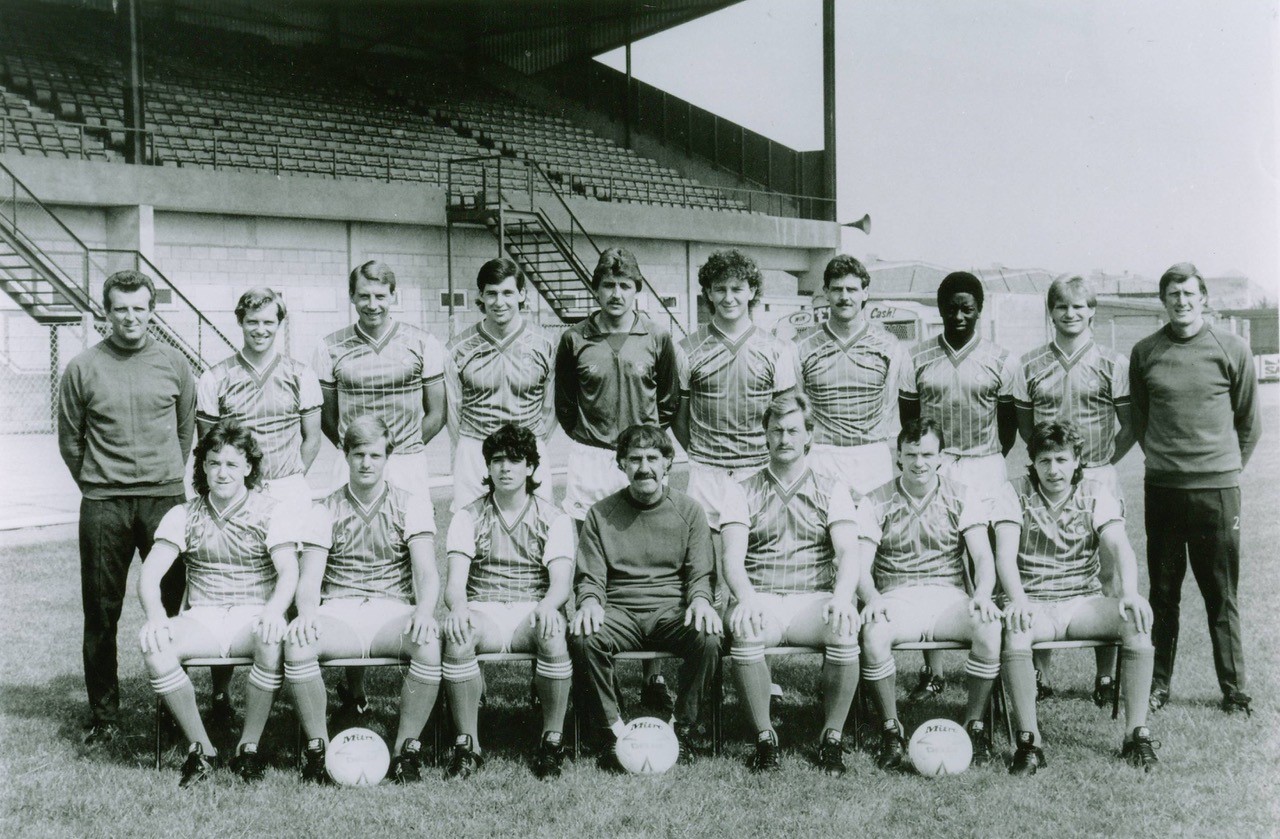 The sale of the Sealand Road ground in 1990 saw Chester forced to play their home games at Macclesfield for two years. Unfortunately a return to the city, and the 6,000 capacity Deva Stadium, culminated in relegation although there was one bright spot when Stuart Rimmer broke Gary Talbot’s league scoring record. The popular striker went on to score a total of 135 League goals for Chester. In 1994 Graham Barrow led City back to Division Two but the yo-yo existence continued with relegation in 1995. Former Everton and Wales captain, Kevin Ratcliffe, led the club to the play-offs in 1997 and was also in charge during the traumatic 1998/99 season when the club went into administration and almost folded due to financial problems. In July 1999 controversial American, Terry Smith, purchased the club and quickly installed himself as manager. However, Chester struggled at the foot of the table and despite the belated appointment of Ian Atkins the club were relegated to the Conference, after 69 years in the Football League, following a heartbreaking home defeat to Peterborough United on the final day of the season.

By the 2001/02 season Chester were facing a further relegation down to the Unibond League but Smith sold the club to Liverpool businessman Stephen Vaughan in October 2001 and results started to improve on the field following the appointment of Mark Wright as manager at the start of 2002.

The revival continued into the 2002/03 season when a host of new signings took Chester to the Conference play-offs. Two hard fought games against Doncaster Rovers, in the semi-final, saw Chester defeated on penalties but the club bounced back strongly from this setback. Based around a strong defence, and the 49 goal partnership of Daryl Clare and Darryn Stamp, City took the Conference by storm in 2003/04 and with only four defeats in 42 games deservedly secured a place back in the Football League. Promotion was guaranteed with a 1-0 victory over Scarborough in front of a delirious capacity crowd at the Deva Stadium who celebrated Chester’s first championship in 77 years. 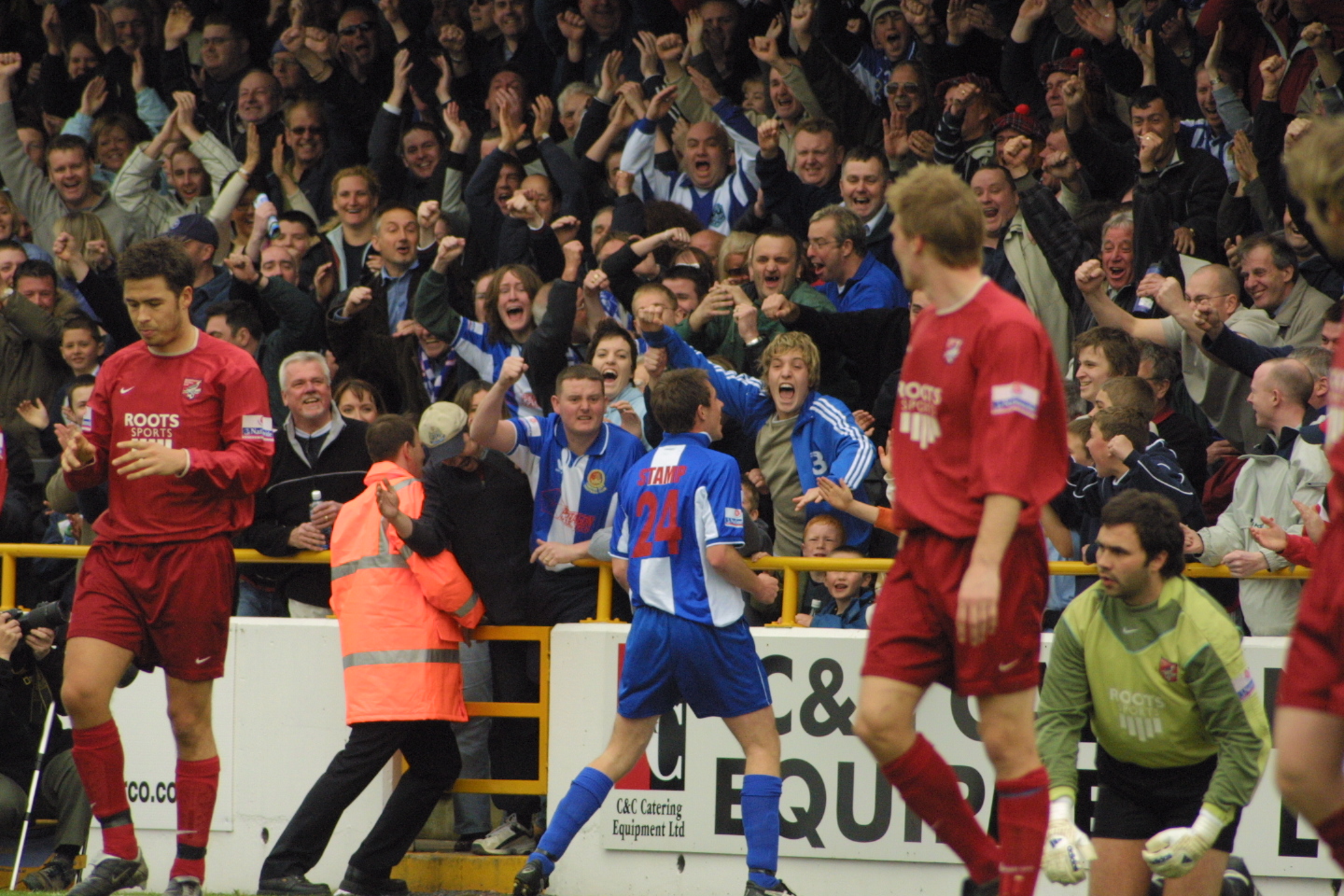 The next four seasons back in the Football League, saw a succession of managers and a series of struggles against relegation. City started the 2008/09 with Simon Davies in charge but the former youth team coach was replaced by Mark Wright in November for his third spell as manager. Sadly, the departure of many experienced players during the transfer window saw City relying on youth team players for the remainder of the campaign and the club were relegated back to the Football Conference. Their final Football League game, on May 2nd 2009, resulted in a 2-1 home defeat to Darlington.

During that summer Chester was placed into administration by Stephen Vaughan and given an automatic ten point deduction by the Football Conference. In a controversial move, the Vaughan family bought back the club and transferred the ownership to a new company, Chester City 2004 Ltd. However the CVA agreed with the creditors was thrown out by HMRC resulting in a further fifteen point deduction as the FA refused to accept the new club’s affiliation.

Unfortunately the financial problems that had dogged the club prior to administration quickly returned. On the field, manager Mick Wadsworth was replaced by the experienced Jim Harvey in October. Although there was a brief upturn in results the appointment of Morrell Maison as Director of Football heralded the departure of Harvey at the end of the year.

Chester started 2010 with a team of untried youngsters as more players departed the club. On February 6th the club played their last ever game, a 2-1 home defeat to Ebbsfleet United. Three days later the club were unable to field a team to play at Forest Green Rovers and the next home fixture, against Wrexham, was called off when the council served a prohibition notice over unpaid police bills. 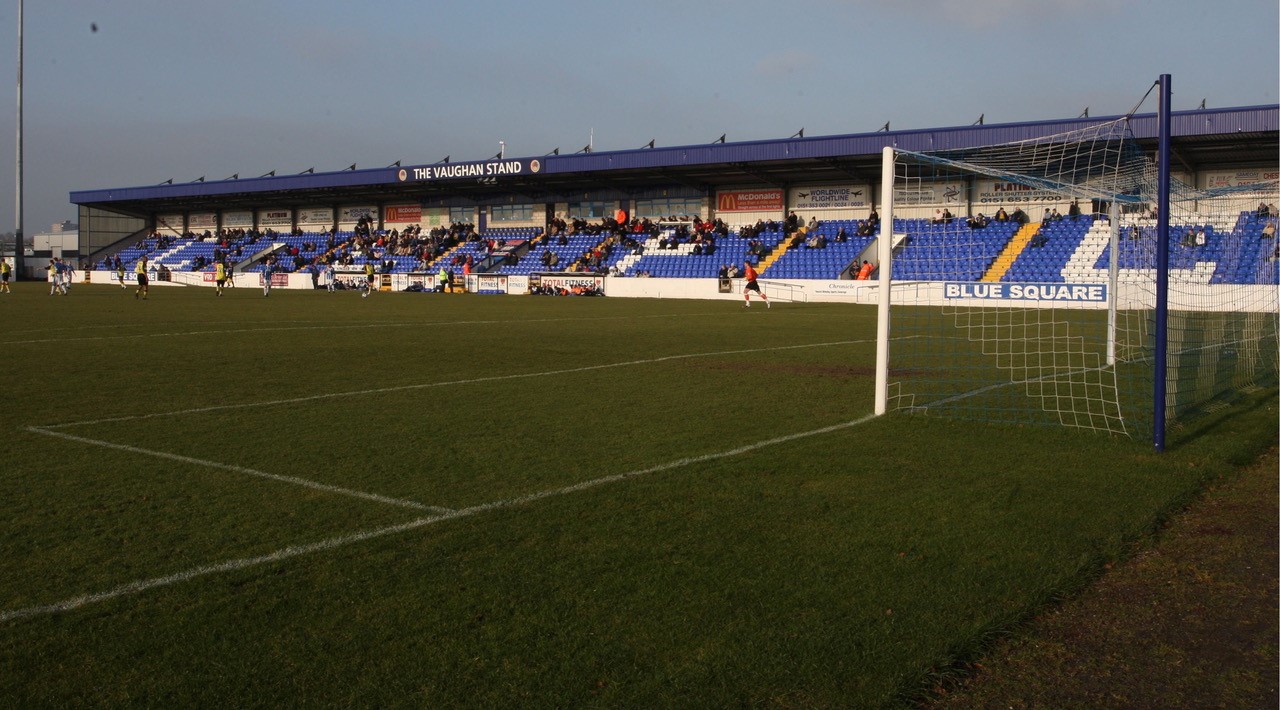 Photo taken at last ever game vs Ebbsfleet in 2010

On February 11th Chester was suspended by the Football Conference and two weeks later expelled from the league. The club was finally wound up in the High Court on March 10th 2010 in the year of their 125th anniversary.

But that would not be the end of the story…

Supporters group City Fans United had already begun preparations to form a phoenix club for the following season and from the ashes of the old club Chester Football Club was officially reborn on Thursday 21st May 2010 and now look’s forward to starting life in the Evo-stik Division 1 North, step four of the National League System.

The new club received another welcome boost when Cheshire West and Chester Council granted the lease of the Deva Stadium, Chester City’s former ground, to the supporter owned club.

Neil Young was appointed the club’s first manager with former Tranmere Rovers, Nottingham Forest and Grimsby Town player Gary Jones as his assistant. Young has acted quickly to assemble a competitive squad of players as the new club looks forward to progressing back up the non-league pyramid.

Saturday 10th July saw the reborn Club’s first friendly match, which ended in a 2-0 defeat at Colwyn Bay, but fans were just pleased to see the Blues back, and almost four times as many supporters made the trip up the North Wales coast than those who attended the final Chester City game in February 2010.

In their first home match on Wednesday 8th September 2010, Chester FC defeated Trafford FC 6-0 which included a hat trick for Michael Wilde, who would go on to win the League’s Golden Boot award. Bradley Barnes scored twice, whilst George Horan scored the other goal.

The same night also saw the Deva Stadium renamed as The Exacta Stadium thanks to a five year sponsorship deal with the local firm.

Chester then went on to clinch the Northern Premier League Division One North (Evo-Stik First Div North) in April 2011 on goal difference but on 97 points, on an amazing last day that saw Chester lose at Garforth, and Skelmersdale win 7-2 at home, but Chester won the League by a margin of 2 goals, resulting in the reformed Club’s first silverware. 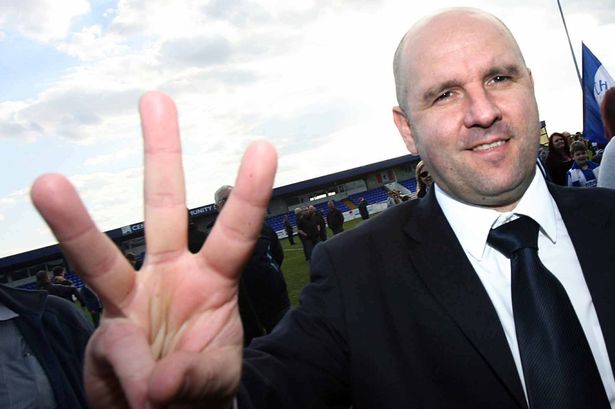 That success was followed up with a second successive Championship in 2012, when a 1-1 home draw with Northwich Victoria ensured Chester claimed the Northern Premier League (Evo-Stik Premier League), and went on to win it with a total of 100 points, and 102 goals scored.

Unbelievably, the success continued, with a third straight Championship win, when Chester clinched the Football Conference North (Blue Square North) in 2013, the 1-0 win over Boston United ensuring that Chester had broken the 100 points and 100 goals barrier for the second season running.

Chester took their place in the Football Conference Premier League for season 2013/14 just three years after Chester City lost their place in the same League but sadly it was final day heartbreak for the Blues as they were relegated in the same season on goal difference, and are now in the Conference North once again. But the season did not end there, as due to Hereford United being expelled from the league, Chester were given a reprieve and started the 2014/15 season in the Football Conference’s elite known as the Vanarama Conference.

After the reprieve from relegation the club, under the management of Steve Burr, finished in 12th place in the renamed National League in 2014/15 and enjoyed a run to the second round of the FA Cup where they lost in a replay to Barnsley.

2015/16 was another tricky season for the Blues and despite a good start in the league a prolonged spell of poor form saw manager Steve Burr depart and his assistant Jon McCarthy step into the hot-seat for the final four games of the season. Three wins in the last three games ensured National League survival for another season.

2016/17 saw the club enjoy a fantastic unbeaten run from September to Boxing Day but the club couldn’t match the first half of the season which saw them as high as seventh but a poor run of form towards the end of the season meant the club finished in 19th place. A piece of good news at the end of the season came in the form of the club selling academy product Sam Hughes to 2015/16 champions Leicester City for an undisclosed fee. In 2018 the club were relegated to the National League North – where they brought in Joint Managers Anthony Johnson and Bernard Morley who had seen Salford City lift the title just months earlier.

With thanks to Club Historian, Chas Sumner.