Congratulations to the Chester FC Under-19’s, who have been crowned CHAMPIONS of the National League Alliance North Division!

The decision was taken by the National League Alliance Management Committee, who agreed to end the season on an “Unweighted Points Per Games Played” basis.

Our Scholars sat in 5th place in the league when all football was stopped due to the Covid-19 outbreak. They had amassed an excellent 26 points from just ten games and were unbeaten.

Despite being in fifth position, the Blues were only four points behind leaders York City with five games less played. Based on the PPG resolution, Chester were crowned outright Champions. 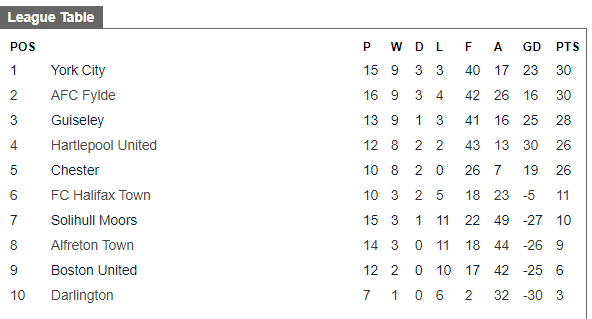 Another remarkable achievement for the scholarship programme, in just its third year, to win this league in its debut season against all of the top names at non-league level in the North of England.

Academy Head Coach Calum McIntyre had this to say: “This was unbelievable news to receive this morning and I am ecstatic for the lads.

“It is a superb achievement and one that must be celebrated even in the unique circumstances in which the boys have been crowned Champions. It was absolutely right to curtail the season given the Coronavirus pandemic and I was so proud of the manner in which the boys accepted the realisation that the season was likely to be null and voided for them.

“This must have been crushing for them given they were enjoying an unbeaten campaign and had just reached a National Cup final which to be fair, the competition would still like to play. When you look at the fixtures, we had travelled to all of the top four away from home and won three of those games and had barely played a home game for one reason or another.

“This is first season that this level of football has existed and it has been a real test for everyone. The standard of football has been immense but equally, the commitment from everyone involved has been huge.

“Those away trips to Hartlepool and Solihull are demanding for both players and staff but this group kept at it week after week and they deserve this recognition. I am at risk of becoming a broken record – but I am exceptionally proud of them and I am so, so pleased that they have something to show for a season that they worked so hard throughout.

“Last minute goals at Guiseley and Solihull and as good a performance as I’ve ever seen from a Chester side away at AFC Fylde have been recognised and I am delighted for the boys. This is a small bit of good news in a season that has ended early for so many clubs and teams and I am determined that the lads are recognised and enjoy this. I am so proud of them.”

McIntyre, who will continue in his Academy Head Coach role alongside being named the new First Team Manager of Runcorn Linnets, was quick to heap praise on those around him for another Academy success.

He said: “From a staff point of view, I want to pay tribute to the support of Swettenham Chemists for their unbelievable backing as well as Mike Day on the CFU Board. They backed the proposal to step up and without the relevant financial support to meet increased costs it would not have been possible.

“George Delves worked tirelessly to ensure that we met the criteria for this level of football and ultimately it has proved to be a decision that everyone can now look back fondly on.

“Our aim is to develop players for Chester Football Club and again we’ve shown we can do that, however, when you get the chance to celebrate this sort of success in the current circumstances, it’s vital we celebrate it and enjoy this feeling.”

Congratulations lads – and well done to our youth setup for making history once again!