After two difficult defeats on the road, Chester return to home comforts tomorrow looking to get back to winning ways.

A loss last Tuesday night at Gateshead before further defeat at York City six days ago has seen the Blues slip down to fourth in the table. However, two weeks ago, they defeated Darlington at the 1885 Arena and will be hoping to keep up a solid home record.

Chester continue to be without George Waring due to injury, and Jamie Morgan is suspended after his red card at Bootham Crescent.

Second from bottom Blyth make the trip down from the North East, after having a difficult end to January. They’ve lost three games on the bounce, and star player Callum Roberts departed for Notts County for an undisclosed fee during the first month of 2020.

The game is also our annual Junior Blues Takeover Day, where the Chester fans of the future get the chance to take over in key matchday roles at the football club!

Congratulations to the following Junior Blues! 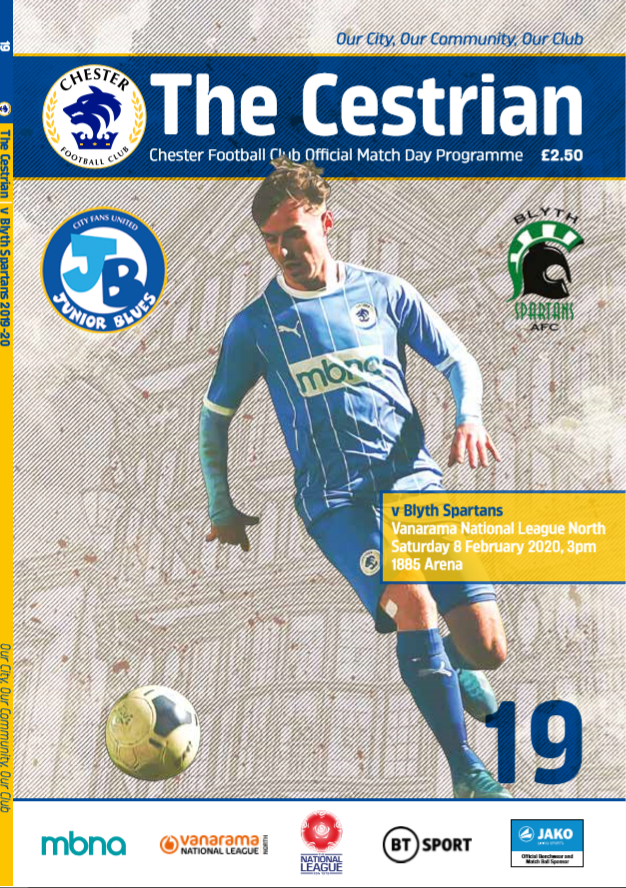 Introducing the new MatchDayInfo App, the home of E-Programmes. Find, follow and interact with Chester FC on the MatchDayInfo App. Giving you the ability to keep up-to-date on ticketing, fixtures, news and match day Programmes. The new dashboard interface allows you to swipe between your selected teams and browse the available match day content. Implementing a simple In-App purchase and read design, making it easier for the fan to download, read and archive their Match Day Programme.

So whether you want to simply pick and choose what Programmes you want to download, or choosing to subscribe to a season long subscription for Chester FC, MatchDayInfo is the complete package for sports fans to get their match day experience fix.