Football will return to the Deva Stadium on Sunday 20th October when a football match will be staged to raise funds for the Squadbuilder £20k #PushForPromotion initiative.

Bernard Morley’s Step-Father, Gary Bleackley, manages a football team that features a number of players that have turned out for Chester FC and others with Premier League experience such as Paul Linwood, Leon Mike, Danny Webber and Steve Halford.

They have agreed to play a match at Deva Stadium on Sunday, 20th October against local league players to raise funds for Chester FC. Bern & Jonno are also expected to don their football boots. Kick Off is 2:30pm. Entry is free although there will be Squadbuilder donation buckets.

The club wishes to thank Gary for his tremendous support. 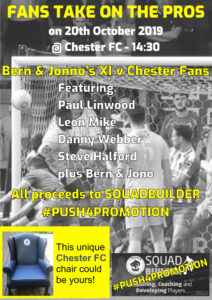