Tonight brings another crunch clash to the Swansway Chester Stadium, and a fantastic atmosphere is promised as the Blues face title chasing Stockport in an all-ticket clash.

Chester have ambitions of their own, a late injury time winner at Nuneaton Borough on Saturday saw the Play-Off hunt intensify. The Blues are three points behind 7th placed AFC Telford, who host Altrincham this evening.

For our opponents Stockport, it’s a massive game as well. Jim Gannon’s side will be backed by a sold out away following knowing that a win in this – their game in hand – would take them to the top of the National League North.

The Blues have already had an input on the title race, with Chorley battling to a goalless draw at the Swansway at the end of March. Bern and Jonno’s side know a win would keep them in the hunt for the top seven but face a very strong Stockport County side. The Hatters suffered a setback on the weekend, conceding a 90th minute equaliser at Hereford on Saturday. Former Blue Nyal Bell was on the scoresheet, he’s joined in the squad by another former Chester FC player in Paul Turnbull.

Earlier in the season, the two teams battled to an entertaining 1-1 draw at Edgeley Park. Akwasi Asante opened the scoring but the Blues were pegged back by a controversial penalty.

The atmosphere was superb that day in December – hopefully more of the same this evening! 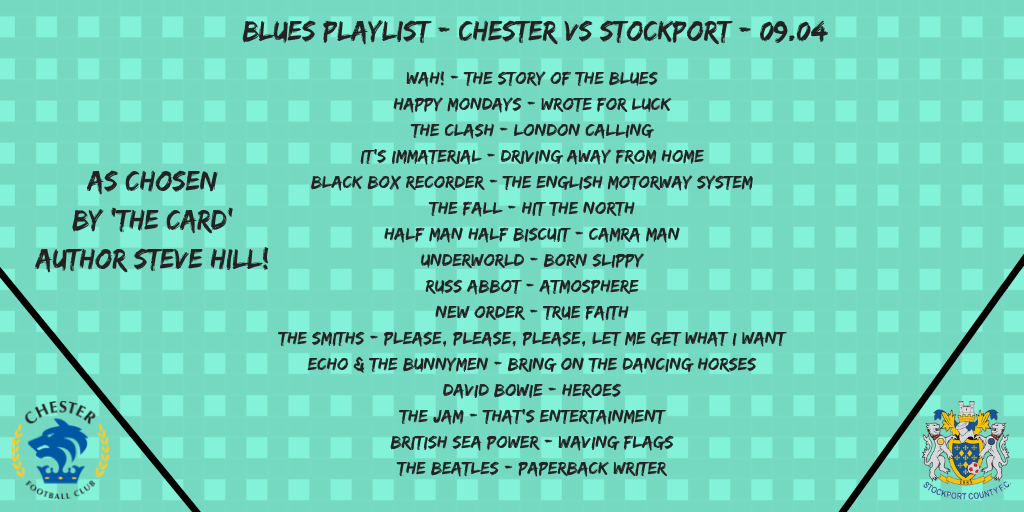 Steve Hill is a Chester FC fan and author, and he wrote ‘The Card’. His book is signed and on sale in our club shop prior to kick off today for just £12!

This match is all-ticket. No tickets will be sold today and you CANNOT pay at the gate. Season ticket holders simply use the relevant game voucher from their books.

THE CHESTER FC MEDIA TEAM ARE PROUDLY SPONSORED BY BUYCLEVERSTUFF