The Blues host the league leaders tomorrow at the Swansway Chester Stadium – looking to build on Wednesday’s 1-0 victory at Darlington.

A massive psychological boost it was, ending the North East hoodoo courtesy of Simon Grand’s fourth goal of the season just before half time. It was a well worked move too – as you can see below!

The victory on Wednesday lifted the Blues back up to 9th place in the table, and keeping touch with the play-offs. It makes tomorrow’s game against the table toppers all the more massive. Captain Scott Burton missed the victory through injury, and George Green didn’t feature as he looks to get back to full fitness. Gary Stopforth’s incredible comeback from injury could possibly be complete by next week; but he will be unable to feature this Saturday.

Our visitors have a massive six games to go in the hunt for the Championship. In fact, such a difficult end it is for them, Chester are the lowest placed side they have to face between now and April 27th! But their destiny is in their own hands as they look to break into the fifth tier. They’ve bolstered their squad with a familar name ahead of the game, signing striker Shaun Tuton on loan from Spennymoor. Tuton left Chester in August to sign for the Moors. 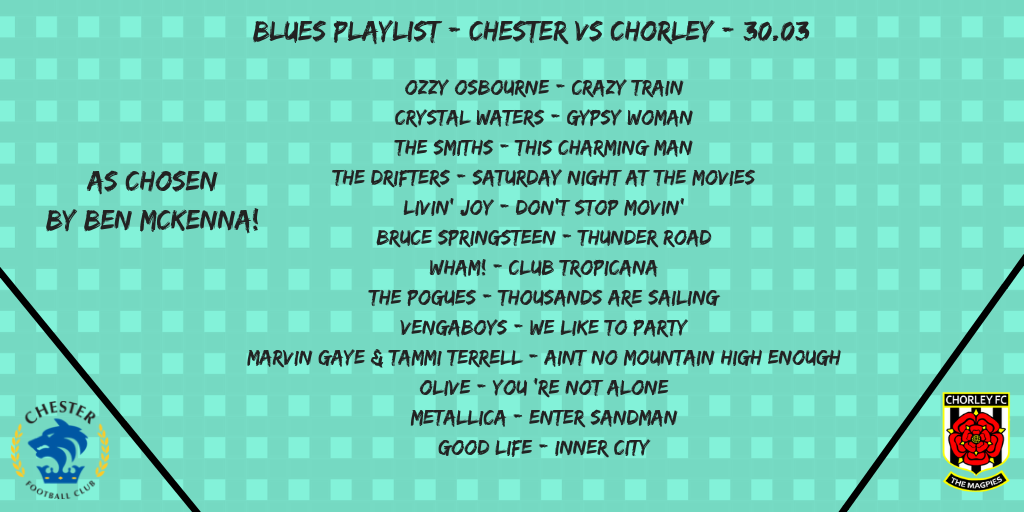