It’s been nearly a month since the Blues played at the Swansway Chester Stadium, and now it’s time for them to get back on track with a National League North clash with Boston United.

Three league defeats on the spin have knocked Anthony Johnson and Bernard Morley’s side out of the play-offs; but they could make up ground with a victory tomorrow afternoon against a side two places and points above them.

A midweek defeat in the Cheshire Senior Cup actually yielded some positivity, and the Blues were unlucky. Hampered by the harsh first half red card to George Green, they battled hard for an hour with ten men and were only beaten by a scrappy injury time goal.

🙌 Getting set for tomorrow! #COYB 💙 pic.twitter.com/WPiFQNASNB

Green will be available for selection tomorrow, as any suspension won’t kick in until the following game. However, Chester FC will be appealing the decision. Bradley Jackson got minutes on Tuesday after missing the Kidderminster game and will be in contention.

Boston United make the trip tomorrow sitting on the cusp of the play-off positions. They’ve won four of their last six games in the league, with goals aplenty. On 26th January, they beat Guiseley away in a 5-4 thriller – and also put five beyond Nuneaton last Saturday.

Craig Elliott’s side have a good away record, with seven wins from a possible 15 on the road this term.

Blues Playlist (As chosen by Chester FC fans on Twitter!) 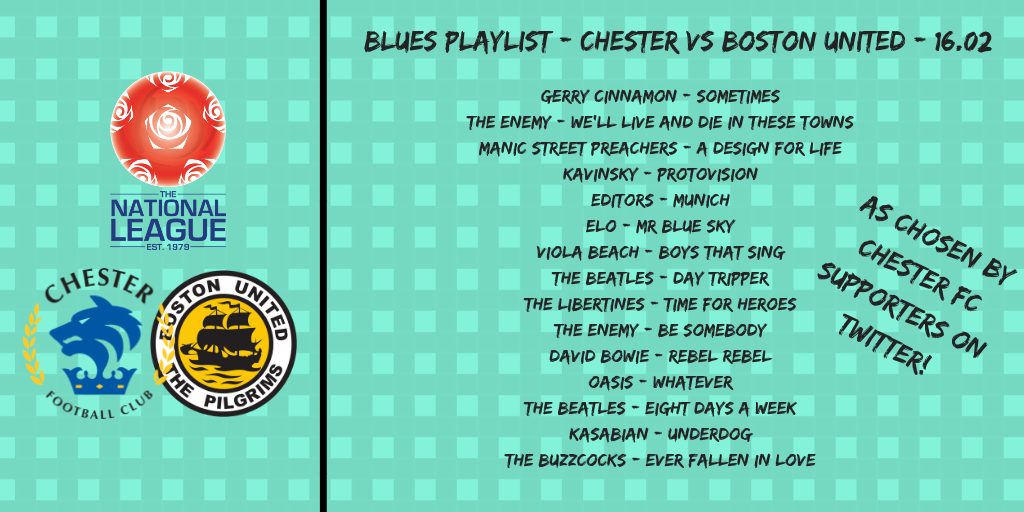