The Blues look to continue their unbeaten start to 2019 tomorrow at the Swansway Chester Stadium – Guiseley are the visitors.

Despite being plagued with injuries going into this one, the form of the home side is something to be positive about. Two wins and a draw in all comps since the start of a New Year – and without a goal conceded.

In midweek, a Chester team with some younger players involved won 4-0 at Winsford United in the Cheshire Senior Cup. Nathan Brown scored twice as well as Iwan Murray and George Green getting on the scoresheet.

Green however misses out tomorrow due to suspension, picking up a red card at FC United on Saturday in the 2-0 victory.

The solid Blues backline is unlikely to change, but changes will need to be made higher up the pitch with Green’s suspension accompanied by injuries to Gary Stopforth, Akwasi Asante and Lloyd Marsh-Hughes. Matty Thomson’s injury at Hereford is not as bad as first feared.

Anthony Johnson and Bernard Morley’s side still keep their place in the play-offs going into the weekend to face 17th placed Guiseley.

It’ll be a Chester return for Marcus Bignot – who is joint manager at the Lions. He was in charge at the Swansway from September 2017 until April last year. Players from the Blues squad of last season that could also play a part are Andy Halls and Kingsley James. 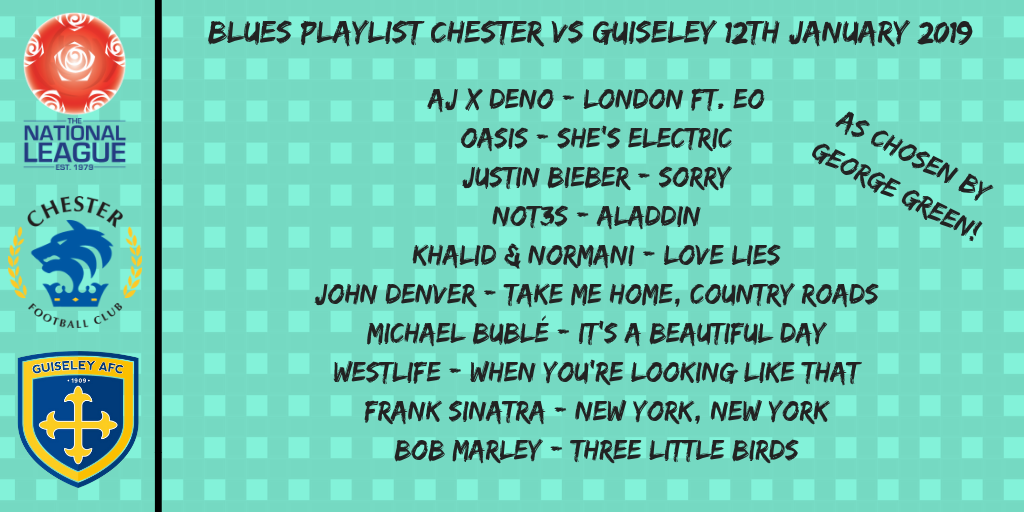