The Blues return to National League North action tomorrow afternoon – as they welcome Darlington to the Swansway Chester Stadium on ‘Retro Day’.

Anthony Johnson and Bernard Morley’s side are without a win in three league games – and were knocked out of the FA Trophy in a replay against Southport on Tuesday. Since then, John Pritchard and Luke Jordan have temporarily left the club to Buxton and Lancaster respectively.

On the incomings front, there is expected to be a new arrival today ahead of the game in just over 24 hours time.

Midfielder Gary Roberts is suspended for this game – picking up his fifth league yellow card of the season at Leamington two weeks ago in the 1-0 defeat.

Darlington make the trip for the first meeting between the sides since both clubs reformed. They sit 15th in the table and will be encouraged by a six game unbeaten run. However, they have drawn each of their last four.

On a Cup front, they were also knocked out at the same stage as the Blues. Last Friday, they fell to a 2-0 home defeat to AFC Telford United. 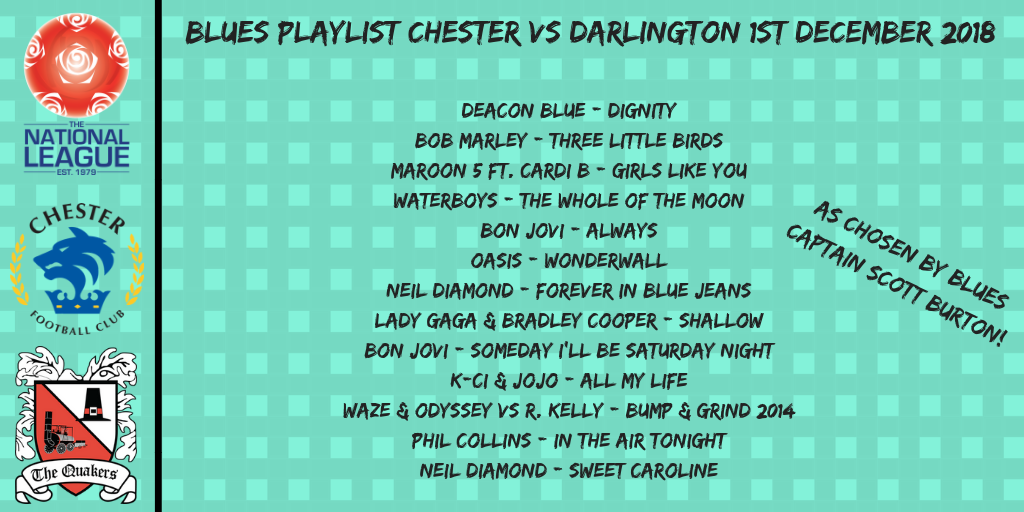 Tomorrow, Chester FC will be going back in time on December 1st when they take on old League rivals Darlington in the National League North encounter at the Swansway Chester Stadium.

A ‘Retro’ theme has been declared for the day of the game, by the club’s Fan Engagement Working Group.

Saturday’s Retro theme has also spread to the turnstiles with special reductions for the match itself, with Adult entry at just £10, Concessions £5, and Under 18s for just £1 – Under 5s entry is free as per usual.

This is an ideal opportunity for Chester fans to pull those old replica shirts and get them on to help celebrate the Retro theme – whether those shirts still fit is of course another matter!

There is also a special ‘Retro’ edition of The Cestrian available to buy on the day too, with lots of unique content inside and a special front cover containing some great images from Chester’s past.