Eleven games unbeaten, Altrincham are the next side to test Chester FC at the Swansway Chester Stadium.

They’ll be a tough test too. Newly promoted into the division, Alty have made a very promising start and sit 10th – seven points behind the 5th placed Blues.

16 goals shared equally between them, Jordan Hulme and John Johnston will be a big threat to the Blues defence tomorrow afternoon.

But Chester have firepower of their own, Dan Mooney has three goals in his last two games – and they’ve been absolute stunners – to move on to six in the league. Anthony Dudley increased his tally to seven goals for the term on Tuesday – but was subbed off at half time in the Nuneaton win and taken to hospital for stitches required on a nasty head cut.

With no Man United, Man City, Liverpool or Everton games tomorrow – it is the perfect chance to spread the word and get down the Swansway to make it an atmosphere to remember. 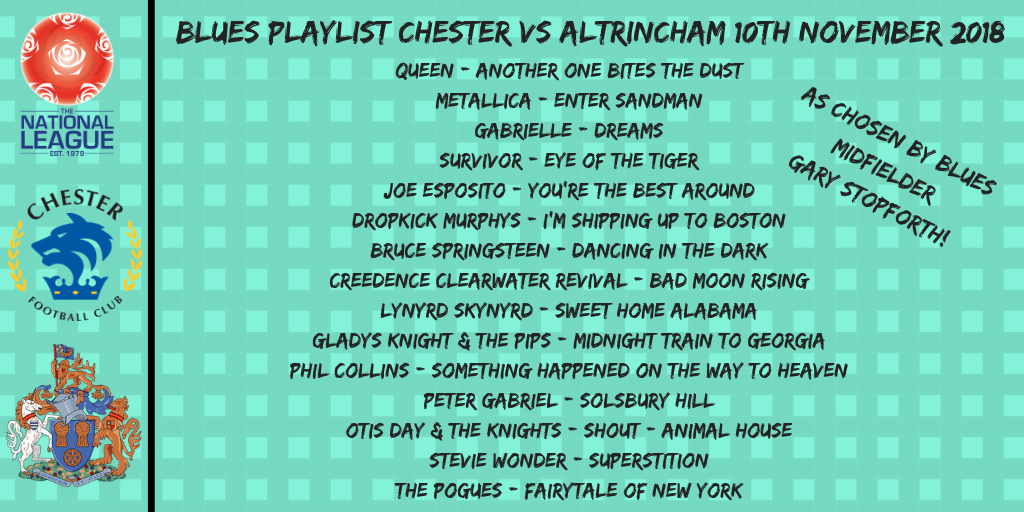 Prior to kick-off, Chester FC will pay tribute to those who have lost their lives in the line of duty as part of the Remembrance Weekend commemorations.

The Blues will join football clubs across the country in remembering and honouring those who made the ultimate sacrifice for their country.

Service personnel and representatives of Chester Armed Forces & Veterans Breakfast Club will be guests of the club for the game and will perform a pre-match tribute including presenting the referee with the match ball and a minute’s silence as a mark of respect.

Before the game supporters are encouraged to head to the Community Trust gazebo where there will be free football activities available including table football and an inflatable speed shot along with free sweets for children and the chance to sign up for City Fans United memberships and the Seals Lottery.