The Vanarama National League season reaches a pivotal point tomorrow – as the Easter fixtures commence; starting with a Good Friday Swansway fixture for the Blues against Torquay United.

A true cliche, it is a real relegation six pointer between the two sides as 23rd meets 22nd. Torquay are level on points with Marcus Bignot’s men but have played one less game. Both teams sit nine points from safety and will be viewing these next two fixtures as ‘make or break’.

The Gulls come into this game having the edge in form. Gary Owers’ side are unbeaten in their last two – a draw away at Solihull Moors followed a superb win at Leyton Orient back on 13th March.

In the reverse fixture at the beginning of September, the Blues claimed a dramatic late point at Plainmoor. Torquay had led for the majority of the game after George Dowling’s 13th minute opener, but Ross Hannah popped up in added time to ensure the spoils were shared.

With two games in four days, Manager Marcus Bignot is expected to make changes to his starting line up on both Friday and Monday. 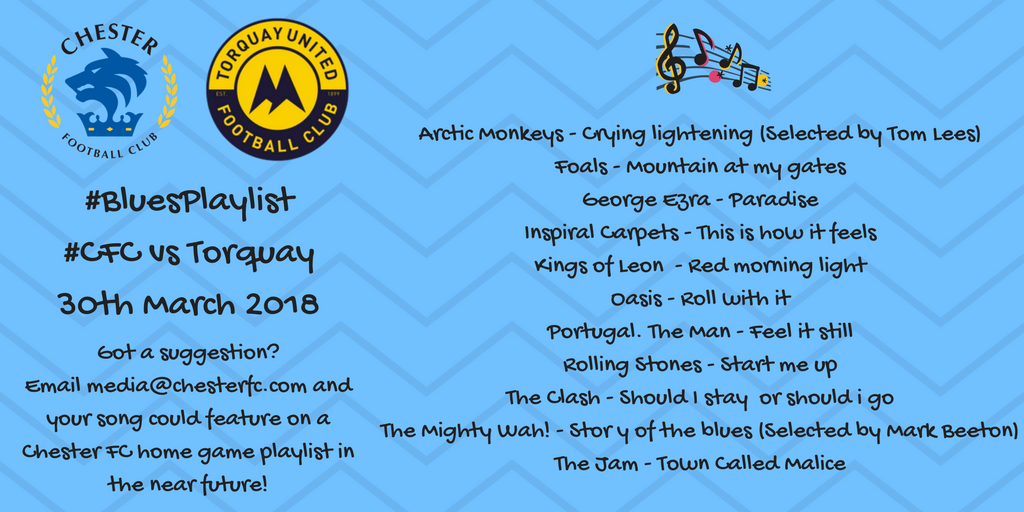 The Cardiff City loanee striker was seen as a coup for Torquay United when he arrived on March 16th. The 23-year-old Mancunian emerged on to the scene not too far up the road – at Connah’s Quay. After 15 goals in 30 games on Deeside, he had trials at Stoke City and Manchester City – before eventually signing for Cardiff City in January 2013. His City debut came as a sub for Craig Bellamy in the Premier League against Chelsea. Following a succession of loan spells, it seemed in early 2017 he would make his step into the Cardiff first team, scoring the winner against Burton Albion last January. However, a nine month injury set back the promising forward’s progress.

Kick off at the Swansway Chester Stadium tomorrow is 3pm. Our postcode is CH1 4LT.

Under 16’s get free entry tomorrow and it’s a ‘tenner on the terrace’! Click here for more information.