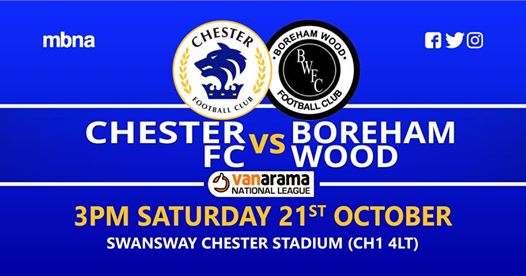 In a return to league action, Chester welcome Boreham Wood to the Swansway Chester Stadium this Saturday afternoon.

A defeat in the FA Cup last time out for the Blues at Kidderminster is something manager Marcus Bignot will be wanting to improve on.

With Andy Halls suspended after picking up his fifth yellow card of the season, Bignot has brought in a new face to the squad.

Right-back Reece Hall-Johnson signs on a loan deal from Grimsby Town, after previously playing at Braintree Town and Norwich City.

Boreham Wood overcame St Albans City in the FA Cup last weekend, and set up a first round tie with League One side Blackpool.

Bruno Andrade drew first blood in the 13th minute when he tucked away a penalty. Shaun Jeffers extended the Wood’s advantage just before the break and then assisted Andrade to score his side’s third.

The Wood are unbeaten so far this month, with their last defeat coming at the end of September.

The Blues still haven’t beaten Boreham Wood since the Hertfordshire-based side’s promotion to non-league’s top flight back in 2015.

Three draws and one defeat have been the only results in the past, with the last fixture being played on the last game of the 2016/17 season, culminating in a 2-0 win for the Wood.

An experienced player at this level, Andrade is definitely going to cause several problems for the Blues backline this weekend.

The 24-year old has scored 10 goals this season, and will be looking to extend his tally in this rich vain of form.

The midfielder, born in Portugal, has also featured in the National League for Woking – but his spell at the Wood has been his most impressive, scoring on 18 occasions in the league over two years.

Kick off at the Swansway Chester Stadium tomorrow is 3pm. Ticket prices can be found here