Chester concluded their pre-season schedule with a solid performance and draw against League Two side Port Vale.

The Blues were more than a match for their League Two opponents – and were on top for a majority of the first half. Kingsley James tried his luck inside the opening ten minutes – only to be denied by a solid block from Danny Pugh.

Lucas Dawson tried his luck with a volley which dropped wide – and Craig Mahon’s effort was blocked by Antony Kay. James then nearly met Dawson’s corner at the back post; as Chester were on the front foot. 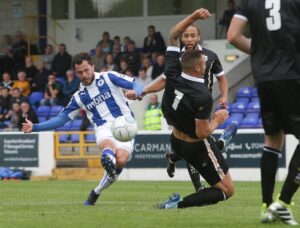 The visitors Vale almost took the lead just before the break – but Rowe-Turner did well to block Tom Pope’s effort inside the box.

Pope was lively in the second half too – heading against the crossbar from a corner before, at the other end, Astles fired a volley straight at the keeper.

Nevertheless, the visitors took the lead on the hour mark when Andy Halls’ misjudged header fell kindly into the path of Rekiel Pyke – who fired home from close range.

However the Blues were level just eight minutes later – Bell met a ball over the top, cut on to his right foot and curled the ball brilliantly into the far corner of the net.

The stunning goal ensured a positive draw against a strong Port Vale side.