Tonight Chester take a trip to Witton Albion for their last away friendly of the Pre-Season campaign. Walsall and Port Vale will visit the Swansway Chester Stadium before the League opener at Solihull Moors on August 5th. Jon McCarthy’s men lost 3-2 last time out at Altrincham.

Liam Davies had levelled for the Blues with a superb finish – before Lucas Dawson’s penalty late on was nothing more than a consolation.

What about Witton Albion?

As of 2017-18, Witton ply their trade in the same division as our last opponents Altrincham – the Evo-Stik Premier. However, as Alty suffered the agony of relegation; Witton were celebrating the joys of play-off success. They finished 2nd last term and defeated Spalding United 2-1 in the final of the play-offs to ensure promotion. Carl Macauley’s side faced Chester last season in the First Round of the FA Trophy. A 1-1 draw at Wincham Park provided a dramatic replay at the Swansway Chester Stadium the following Tuesday. 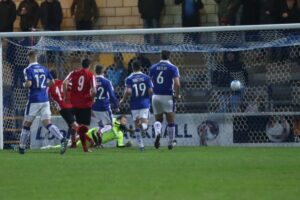 Witton led from the first minute – after scoring a penalty that was awarded in just SIX seconds. With the Blues down to ten men, and Albion down to nine men – James Alabi equalised for Chester with a spot kick of his own two minutes from time. Then, Elliott Durrell won it in injury time for the Blues – a breathless encounter.

Parking: The Car Park is past the Social Club on the right.