Third of the week!

Following away trips on both Monday and Tuesday to Runcorn and Flint respectively – the Blues are back in action tonight at Hyde. Jon McCarthy’s side have mustered two wins from two so far in pre-season. A 5-1 win at Runcorn was followed up with a 2-0 victory at Flint Town United on Tuesday – Jordan Chapell struck at the end of a super move in the first half; before Trialist D fired home from distance to seal the win. 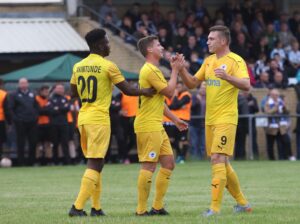 What about Hyde United?

The visitors are certainly not new opponents to Chester! The Blues did the double over Hyde in their first Conference season in 2013-14 – and last term United knocked us out of the Cheshire Senior Cup. A youthful Blues squad that night took the visitors to penalties after an enthralling 3-3 draw but were beaten on spot kicks 5-4.

Hyde currently ply their trade in the Evo-Stik Division One North – the league Chester began in and won back in the reformation season, 2010-11. Darren Kelly’s side finished 10th last season.

Kick off tonight at Ewen Fields is 7.45. The postcode for the ground is SK14 2SB.